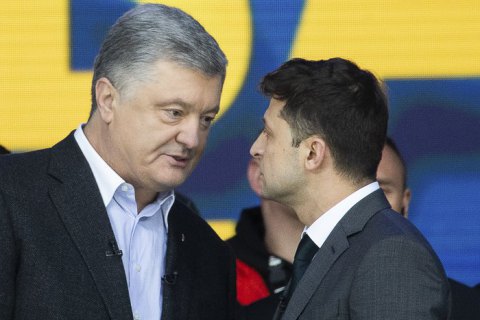 President Petro Poroshenko has congratulated his successor, Volodymyr Zelenskyy, whom the Central Electoral Commission officially declared the election winner on 30 April, and arranged to meet him.

The president expressed hope that Zelenskyy would continue his course towards membership in the European Union and NATO.

“But what needs to be done immediately is to demonstrate to all our partners a single Ukrainian position at a time when by distributing Russian passports in the occupied territories, the Kremlin is implementing the next stage of the hybrid war against Ukraine. Thus, Putin is preparing a rationale for a new round of military aggression under the pretext of allegedly protecting the rights of Russian nationals. Russia deserves a significant tightening of sanctions against it. This question will be the main thing that I will focus on in the last weeks of my presidential tenure. But to continue and complete the solution of this problem is up to the new president. Therefore, I believe that we should coordinate our efforts," Poroshenko said.

The president said that the election rivalry is a thing of the past.

The new president has to be inaugurated within 30 days after 30 April, since the Central Electoral Commission announced the official election results this day.