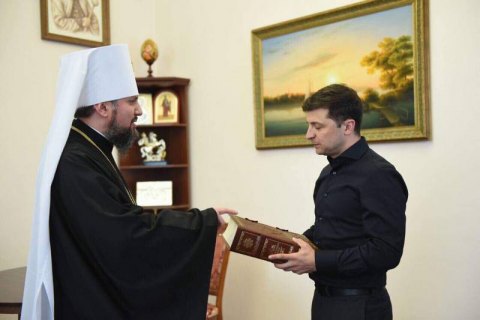 Epifaniy presents a copy of the Ostroh Bible to Zelenskyy
Photo: ze2019.com

The Culture Ministry noted that these were Zelenskyy's first meetings after the announcement of the official election results by the Central Electoral Commission earlier today.

Epifaniy, who was the first to meet Zelenskyy, tweeted that he would "pray to ask God to give the new head of state strength to bear the burden of responsibility for the unity of Ukraine. Together we must protect and multiply what Ukrainians have already been given".

All three church leaders congratulated him on Easter and his election victory.