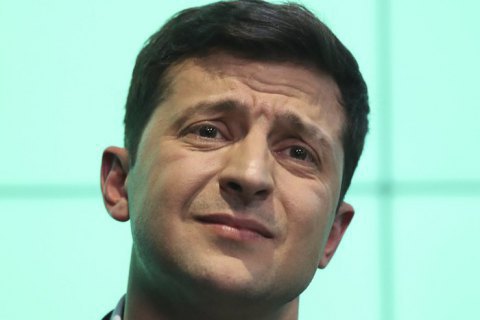 Showman Volodymyr Zelenskyy, who appears to have won the presidential election in Ukraine, has suggested that the Central Electoral Commission (CEC) has been deliberately delaying the official announcement of voting results to time the inauguration for after 27 May so that he would not be able to dissolve parliament.

"Victory is there, but there is no authority. Someone is hiding the [ceremonial] mace from me. I will explain what is happening: the CEC is delaying the official announcement of the results so that parliament can delay the scheduling of the inauguration. So that the inauguration will be after 27 May. Why? So that President Zelenskyy was not even able to think about the dissolution of parliament. It seems to me that this is unfair," he said in a video post on Facebook.

The CEC has dismissed Zelenskyy’s accusations as groundless and said that, on the contrary, they are working in an "unprecedentedly fast mode", CEC deputy head Yevhen Radchenko told Ukrainian News.

He recalled that under the law, the commission is obliged to establish the election results before 1 May. In the first round, the commission announced the results three days ahead of the deadline.

Earlier, Zelenskyy said that he was looking forward to having a majority in parliament of the next convocation.

According to the KIIS poll, if the parliamentary elections were held in mid-April, there would be four to eight parties in parliament whose rating is above or close to the 5% barrier. Among them are Zelenskyy's Servant of the People and the pro-Russian Opposition Platform-For Life.