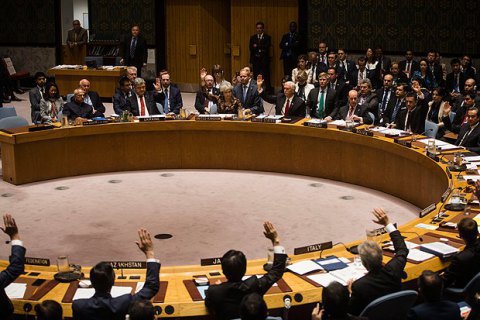 An emergency meeting of the UN Security Council on the Ukraine issue will be held in the afternoon on 25 April, the spokesman for the Permanent Mission of Ukraine to the UN, Oleg Nikolenko, has said on Facebook.

"An urgent meeting of the UN Security Council in connection with the Kremlin’s decision to issue Russian passports in Donbas will be held tomorrow, 25 April, at 10.00 p.m. Kyiv time (3.00 p.m. New York time). The meeting will be convened at the request of Ukraine and will take place in an open format. Germany, as chairman of the Security Council, and other partners of Ukraine, have responded promptly," he said.

The diplomat told the Ukrinform news agency that the Russian decision to issue passports to residents of the separatist-held areas in Donbas violates the UN Charter, the Security Council's Resolution SC 2202 (2015) on the adoption of the set of measures to implement the Minsk agreements, for which Russia also voted.

On 24 April 2019, Russian President Vladimir Putin signed a decree allowing residents of certain regions of Donetsk and Luhansk regions to obtain Russian citizenship under a simplified procedure. This means they are exempt from the need to pass compulsory exams and from the requirement to stay in Russia for more than five years.