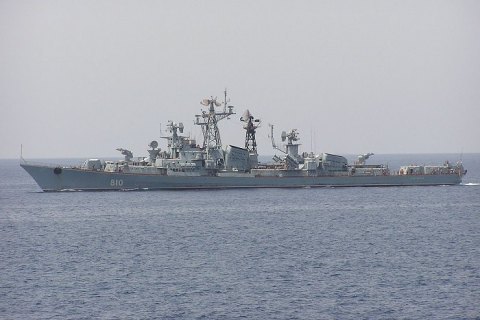 A Russian naval ship has entered the Black Sea area sealed for shooting practice as part of the Sea Breeze 2019 international exercise, the press service of the Ukrainian Navy has said.

"On 10 July 2019, the Russian Federation once again showed its true face and, while neglecting international law, provoked an emergency in the Black Sea. In particular, despite the coastal navigation alert that the area is closed for the Sea Breeze 2019 international exercise, the Russian Black Sea Fleet's Smetlivy ship at around 8 on the morning of Wednesday, 10 July entered the area closed for navigation, where the shooting practice of the naval artillery of the sea group of the international coalition was held, having thus provoked a dangerous situation," the Ukrainian Navy said.

The Ukrainian frigate Hetman Sahaydachniy called on the ship in accordance with international protocol but the latter pretended it was having "communication problems".

The Navy Command pointed out that this fact is yet another reason for the international community not to take Russia as a predictable subject of international maritime law.

The international exercise Sea Breeze 2019 began in Odesa on 1 July. Around 3,000 servicemen on 28 ships and 28 aircraft from Ukraine, the USA, Georgia and Moldova are taking part. The exercise will last for 12 days in Mykolayiv, Kherson and Odesa regions on land, in the air and in the sea.