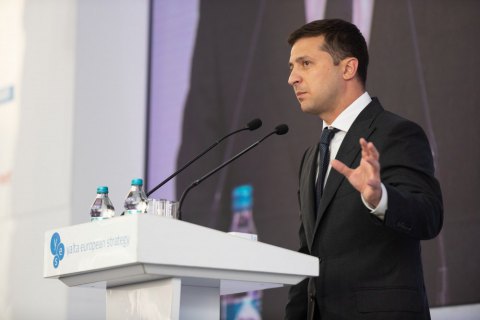 President Volodymyr Zelenskyy has signed the law "On the special procedure for removing the president of Ukraine from the post (impeachment)", according to the parliament website.

It takes at least 226 MPs to initiate impeachment and they cannot recall their signatures afterwards.

To conduct an investigation, a special parliamentary interim investigation commission is created within 30 days. It must include MPs from all factions and groups in proportion to their number, as well as special prosecutors and special investigators.

The commission will investigate the fact and circumstances of the crime, verify the validity and completeness of the evidence, and within six months prepare proposals for a draft resolution on the charging of the president.

If the draft is adopted, parliament will send it to the Constitutional Court and the Supreme Court, which must verify compliance with the constitutionality of the procedure and the presence of signs of crime in the president's actions.

In case of negative conclusions, the Constitutional Court should eliminate violations and, if necessary, to conduct an additional investigation.

If parliament impeaches the president, until the election of a new head of state, his powers will be performed by the head of parliament.

Parliament adopted the law on impeachment on 10 September. It was signed by speaker Dmytro Razumkov on 19 September.