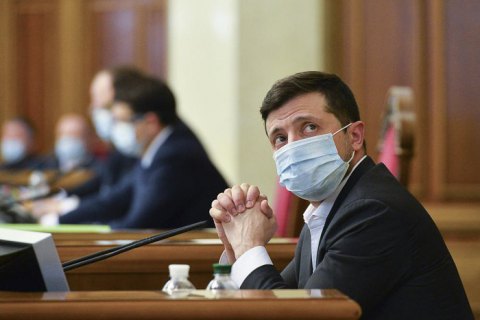 President Vladimir Zelenskyy called on Ukrainians to treat quarantine restrictions in an understanding and responsible manner.

"Dear citizens! Today our state is acting as tough as the situation requires. Our actions are absolutely symmetrical with those of most countries in Europe and the world. And sanctions for violating the quarantine rules, for example, in Italy amount to 3,000 euros, in France almost 4,000 euros, in Singapore up to 10,000 dollars, and in Spain up to 30,000 euros," Zelenskyy said.

The president said that the government is guarding democratic values and freedoms, but there are times when the health and lives of an entire nation become a priority.

"Today is just such a time. Let’s not turn into offended children whom parents did not allow to eat ice cream during a cold. All restrictions are only temporary inconveniences, they are important and necessary for your safety," Zelenskyy said.

"I would like to make a point that the mayor, for example, of Zaporizhzhya violates the government’s decision and launches public transport. The Security Service of Ukraine and the Interior Ministry have already reacted to these actions," the president added.

Zelenskyy separately raised the issue of Easter celebrations. He noted that Ukrainians found themselves in a situation in which they are forced to change their traditions. He called on citizens not to endanger their families' health and said that the authorities were doing everything so that citizens could celebrate Easter at home.

Earlier, Kyiv mayor Vitaliy Klitschko said that he felt like a kindergarten teacher, having to call on city residents over and over to follow quarantine rules.