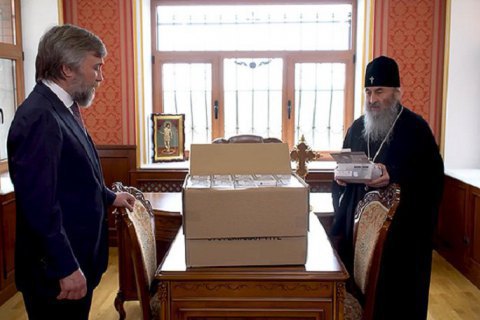 Pro-Russian MP Vadym Novynskyy had met Metropolitan Onufriy, the leader of the Moscow-run Ukrainian Orthodox Church, a day before he tested positive for the Covid-19 coronavirus.

On 14 April, he visited the priest to present him with 850,000 surgical masks bought by his foundation to be distributed among believers in all regions of Ukraine "to ensure maximum safety for those who decide to attend Easter services" in accordance with quarantine regulations, his foundation said.

On 15 April, Novynskyy tested positive for the virus.

Commenting on the news, Archbishop Yevstratiy (Zorya) said that Novynskyy had thus "not only contributed to the deepening of the crisis in public attitude towards the Church as an institution, but directly exposed Metropolitan Onufriy to the risk of the disease".

Yevstratiy criticised Novynksyy for visiting the 75-year-old metropolitan, who had limited his social contacts "but could not say no to the 'gray eminence' or in this case 'chief subdeacon'".