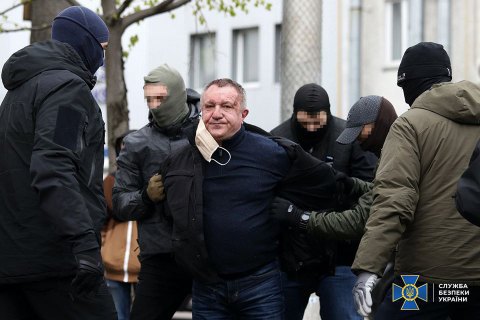 Kyiv's Shevchenkivskyy district court has placed Security Service of Ukraine (SBU) Maj-Gen Valeriy Shaytanov in custody for 60 days. He is suspected of having worked for the Russian Federal Security Service (FSB).

He was detained on 14 April on suspicion of carrying out intelligence and terrorist activities in the interest of the FSB to the detriment of Ukraine's state security. He is suspected of high treason and terrorism.

According to SBU chief Ivan Bakanov, Shaytanov's detention is a testament "new approaches in the Service work yielding important fruit".

"Unfortunately, the person received the general's rank after the Revolution of Dignity and was supposed to defend Ukraine whereas, in fact, he worked against it. We have conducted a complex, lengthy, multi-level special operation. This is the most important exposure of the Security Service," Bakanov said.

"We are not just making the Security Service of Ukraine more effective, but we are also purging it. We will focus on counterintelligence and state security issues. We will continue to protect the country and find traitors, no matter what posts they hold," he added.

SBU Maj-Gen Valeriy Shaytanov was detained on 14 April on suspicion of having planned the murder of well-known volunteer Adam Osmayev. For this, the general was allegedly promised $200,000 and a Russian passport.