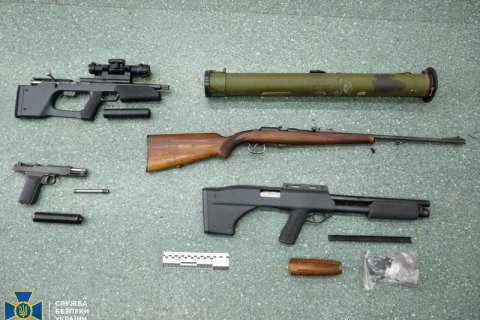 The counterintelligence of the Security Service of Ukraine (SBU) has detained another suspect in the case of SBU Maj-Gen Valeriy Shaytanov, who is suspected of committing high treason and plotting the murder of volunteer Adam Osmayev.

The new suspect is a former employee of the SBU Special Operations Centre "A", who was also in contact with Russian FSB Col Yegorov, the SBU said.

A search at his place revealed an arsenal of firearms and ammunition.

"Law enforcers seized an RPG-26 hand-held anti-tank grenade launcher, an under-barrel grenade launcher and two grenades to it, a STEYR 1914 pistol with a silencer, a carbine rifle, a shotgun, a homemade rifle with a silencer, three RGD-5 grenades, plastid-like material, 12 detonator capsules and more than 9,000 rounds of various calibres," the SBU noted.

The detained man is suspected of illegal possession of weapons.