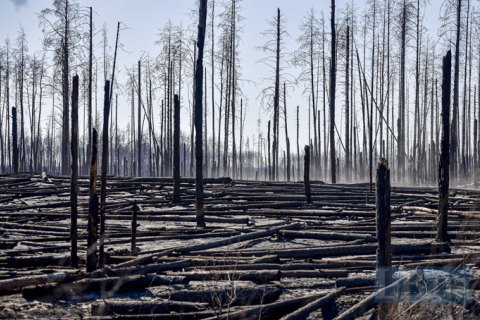 The State Emergencies Service needs several more days to liquidate smoldering in the Chornobyl exclusion zone after the fire has been extinguished there, its head Mykola Chechotkin has said, as quoted by the presidential office.

He said that there was no open fire now.

He told President Volodymyr Zelenskyy that the situation got complicated after 4 p.m. yesterday because of strong winds blowing up the fire and making it difficult to control it. The State Emergencies Service had to send even more equipment and personnel to the site. Rain helped the firefighting efforts too.

"Overall, fire aviation made 227 flights, having dropped 500 t of water yesterday. Radiation background in the exclusion zone is within the norm and not increasing," Chechotkin said.

Rescuers stopped the fire from reaching arms depots, the Shelter and Vector facilities, the distribution station of the Chornobyl nuclear power plant and a nuclear waste storage facility.

The National Police said suspected arsonists were detained near the two seats of fire. One of them is suspected of burning around 7 ha of dry grass.

The fire in the Chornobyl zone began on 4 April after a resident of the village of Rahivka in Kyiv Region set grass on fire "for fun".