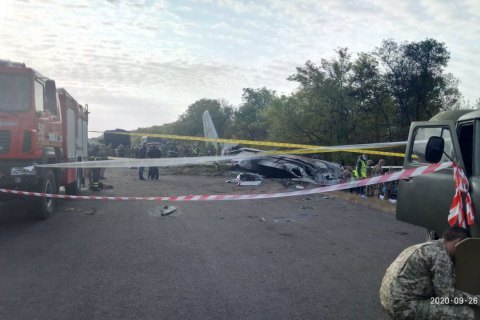 The Air Force Command of the Armed Forces of Ukraine has described as "lies and manipulation" the statement of the head of the Kharkiv regional state administration, Oleksiy Kucher, that the plane carrying the son of Air Force Commander Serhiy Drozdov, was given landing priority over the faulty An-26 which crashed on 25 September.

Kucher made the allegations during a video link with Savik Shuster's Freedom of Speech TV talk show.

Drozdov, who was in the studio, said that he had not issued any such instructions to the flight commander.

"Although Mr. Kucher did not come to the studio, during a live broadcast he shamefully made personal insults and alleged to the commander of the Air Force that the plane with his (Drozdov's) son onboard was given priority during landing. That this minute could have prevented the successful landing of the An-26SH (...) This is an outright lie and manipulation! This plane did not affect the An-26Sh crash in any way!" the Air Force command said in a statement on Facebook.

The Air Force criticized the media for picking the "sensationalist" headline.

"The investigation into the terrible plane crash is underway. The truth, the culprits and all the details of the tragedy must be established. We urge you not to be manipulated and to use data from reliable sources," the military said.

Kucher, for his part, recorded a video message in response to the accusations by the spokesman for the Air Force Command, Yuriy Ihnat.

Kucher expressed doubts that the "judgements" against him were the official position of the Defence Ministry.

The An-26SH military-transport aircraft crashed during a training flight outside Chuhuyiv in Kharkiv Region, killing 26 of 27 people onboard.