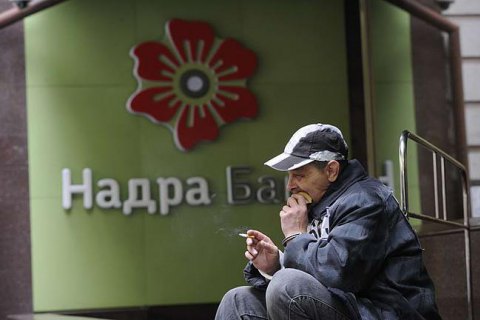 International experts have conducted a forensic audit of the bank and found that the money was transferred to companies associated with the Segal brothers and Continuum Group, the Censor.net has reported. Neither the multibillion refinancing by the National Bank of Ukraine nor the money of new owner Dmytro Firtash were enough to save Nadra Bank from its final decline.

These are the findings presented by FinClub editor-in-chief Ruslan Chorny in the article "Who siphoned money off Nadra Bank", quoted by Censor.net.

FinClub has at its disposal the conclusions of Nadra Bank's financial audit, which was carried out by the KPMG auditing firm at the request of the Deposit Guarantee Fund.

According to Chorny, the comprehensive analysis report for insolvent Nadra Bank is not for public disclosure. It looks at the facts of bringing the credit institution to bankruptcy and misappropriating its money. Both institutions confirmed to FinClub off the record that the report exists but declined to comment.

FinClub analysed several key findings of the report, in which the auditors examined why Nadra Bank was put into provisional administration twice, concluding that it first faced the problems in 2008-2009 when it incurred UAH 4.8bn in losses. "The auditors found out that the former shareholders siphoned the money at a time when the NBU was refinancing Nadra," the article reads.

"The NBU was supposed to monitor how its money was spent, but banking supervision in the late 2000s was negligent and could be financially motivated as the next NBU leadership later claimed on many occasions," FinClub said.

The website noted that the auditors concluded that a significant number of borrowers potentially associated with previous shareholders stopped servicing their loans after Nadra was first put into provisional administration. "Investment certificates of companies issued by potentially associated parties were not redeemed during 2009-2015. The lack of cash flows on these assets significantly worsened the financial condition of the bank," the document reads.

"The [Deposit] Guarantee Fund, together with the changed management of Nadra Bank, initiated criminal proceedings against the previous owners: Igor Gilenko, the Segal brothers, Igor Yeremeyev's Continuum Group (its representative Sergiy Lagur was a member of the bank's supervisory board), as well as against the heads of a number of companies associated with them. The auditors learned that of the entire stolen sum, law enforcers were only able to recover a compensation of UAH 854m in the form of bail and a monetary compensation of UAH 403m from companies associated with Mr. Gilenko and the Segal brothers. Most of the criminal cases have been reopened, "the website reports.

According to FinClub, KPMG's conclusions are also confirmed by the NBU's official statement dated 6 February 2015, which it made when Nadra Bank was taken off the market again.

"Nadra Bank was declared insolvent because it has been unsustainable since it was placed into provisional administration in 2009. That was done, in particular, as a result of the risky activities of the previous management led by I.V. Gilenko who failed to ensure quality management of the bank and in fact drove it into bankruptcy," FinClub quotes the NBU as saying in an official statement.

"The NBU also noted that the last owner of Nadra Bank, Dmytro Firtash, who committed to save the institution in 2011 and invested UAH 3.5bn in its capital, could not sufficiently capitalize the bank in the conditions of Ukraine's economic recession in 2014-2015," FinClub says.

It recalls that the regulator once refused to approve Firtash's plan to restore the bank's solvency, under which UAH 11bn were to be poured into the bank, of which UAH 6.85bn were to be provided by extending the NBU refinancing loan for seven years at 10%.

FinClub notes that last week the OCCRP consortium reported a leak of information from the US FinCEN, which allegedly suggests that the purchase of a 49% stake in the Zaporizhzhya Titanium and Magnesium Plant (ZTMK) by Dmytro Firtash was financed by the NBU stabilization loan issued to Nadra Bank in spring 2014. According to the OCCRP, shortly after receiving the refinancing from the NBU, Nadra Bank issued a loan to Sintez Resurs LLC, and these funds were later allegedly used to buy a minority stake in ZTMK.

The website recalls that the agreement on the establishment of ZTMK LLC was concluded between the Government of Ukraine and Dmytro Firtash's structures in 2013. The same year the businessman's companies financed most of this agreement.

FinClub has enquired Group DF about this episode. The latter explained that the mentioned loan to Sintez Resurs LLC and interest on it were repaid in full to the bank in December 2014, a few months before Nadra was declared insolvent in February 2015. Group DF also insists that Nadra Bank and Sintez Resurs LLC were not associated parties and that the loan was issued on market terms.

"In its public statements or reports, the NBU has never mentioned any information on the possible use of the National Bank's refinancing funds by Dmytro Firtash's structures to finance commercial transactions. In particular, with regard to the mentioned ZTMK LLC," FinClub says in its analysis.

It recalls that on 5 February 2015, the National Bank declared Nadra Bank insolvent for the second time, and the Deposit Guarantee Fund put it into provisional administration.

According to its statement on 6 February 2015, the NBU decided that the bank could not be allowed back into the market, partly because the shareholders of the private joint-stock company Nadra Commercial Bank did not confirm their readiness to provide prompt financial support for the institution, including for repaying the debt made by the previous shareholder.

In June 2015, the Deposit Guarantee Fund launched the process of Nadra Bank liquidation.