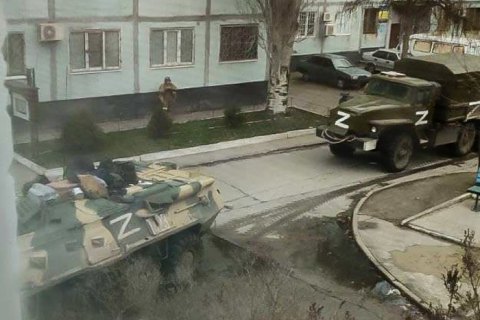 Mayor of Enerhodar, Dmytro Orlov, reported that city authorities could not get access to where they work.

“At 8 a.m, city authorities came to work, but could not get into the city hall building”, Orlov wrote on Telegram. “The occupiers have locked the doors. Despite everything, Enerhodar has been and remains Ukrainian. Even when we are in isolation.” 9.30 a.m update: “We have to work in the room that was provided to us by the owner of the pizzeria place (thank you!). But one way or another, the city council continues work under the Ukrainian flag. We can’t help but work because public utilities are working today, because tonight, just like the day before yesterday, our guys were on duty in the city, patrolling so there would be no looting,” his first deputy, Ivan Samoiliuk, shared on Orlov’s Telegram.

“Several days of forced contact with the representatives of the Russian military, and I want to draw my conclusions. I am sure: even though today there are tanks in our city and a nuclear power plant controlled by the Russian forces, we have already won this war. I am sure that Ukraine will always be Ukraine. And today, it seems, Russian soldiers are more afraid of the civilian population than even of Putin. They came in with the confidence that they had come to liberate us from Nazism and fascism. Most of all, and I see this clearly, they are afraid and hate us because they cannot afford the freedom and freedom of thought that we can afford. A servant will always be afraid and hate someone who allows himself to think about freedom and be free. Everything is going to be Ukrainian! And the victory will be ours.”

As reported this morning, Zaporizhzhia Nuclear Power Plant (NPP) is under Ukrainian control. However, the Russian military still controls the station’s perimeter and remains in Enerhodar.

Previously, Russian forces shelled Enerhodar and the Zaporizhzhia NPP within in the city. As a result, there was a fire onsite. The station’s staff was not injured but three Ukrainian military defenders were killed and two were wounded.

As a result of artillery shelling of the Zaporizhzhia NPP industrial platform, the reactor building of Unit 1 was damaged. Two artillery shells hit the structure of the spent nuclear fuel storage site.

The State Nuclear Regulatory Inspectorate of Ukraine stated that the degree of damage to the structures and systems of these nuclear facilities and their implications for safety requires additional assessments based on the results of thorough inspections by special services.The building of the training center, located right next to the Zaporizhzhia NPP industrial site, was severely damaged.Currently, operational personnel monitor the condition of power units, working under pressure from the armed forces of the Russian Federation which captured Zaporizhzhia NPP.No changes in the background radiation of the Zaporizhzhia region have been recorded; the background gamma radiation is within normal limits.At the same time, “Energoatom”, the National Nuclear Energy Generating Company of Ukraine published data modeling the movement of air masses within the next 9 hours in the event of an accident at the Zaporizhzhia nuclear power plant.The agency emphasized that the model of distribution and trajectory of air masses from the industrial site of Zaporizhzhia NPP was developed in case of a hypothetical accident at Zaporizhzhia NPP.