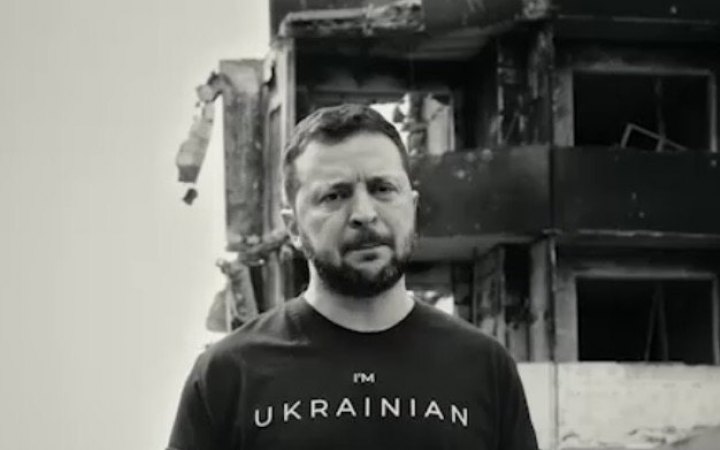 President Volodymyr Zelenskyi released a video address on the occasion of Remembrance and Reconciliation Day. The black-and-white video was recorded against the background of the apartment buildings destroyed by the russians in Borodyanka, Kyiv Region.

"Can there be a black-and-white spring? Is there an eternal February? Are golden words devalued? Unfortunately, Ukraine knows the answers to these questions. Unfortunately, these answers are: 'Yes,'" the president said.

Every year on May 8, Ukrainians honor everyone who defended the planet from Nazism in World War II. Millions of lost people, millions of reasons to say "never again".

On February 24, the word "never" was erased. Shot and smashed by hundreds of rockets at 4 am. Ukrainians heard the word "again".

Russia covered little Borodyanka with 250 kilograms of high-explosive bombs. The city is dumbfounded, it can't say "never again", but everything is clear without words. There used to be walls in this house, there were photos on them, and in the photos - those who went through the hell of war. 50 men sent to Germany for forced labor. People burned alive when the Nazis burned more than 100 houses here. 250 soldiers who died in World War II and a total of almost 1,000 residents of Borodyanka who fought and defeated Nazism. To say "never again". The russians killed "never again" by saying "we can repeat".

"And the monsters began to repeat. And the cities that survived the terrible occupation, so terrible that 80 years are not enough to forget about it, saw the occupier again and got the second date of occupation in its history. And some, such as Mariupol - the third." said the president.

"Evil has returned again. In a different form, under different slogans, but with the same goal. A bloody reconstruction of Nazism has been staged in Ukraine. A fanatical imitation of this regime, maniac detailed reproduction of its atrocities and alibis, which allegedly give the evil the sacred goal. The repetition of its crimes and even attempts to surpass his teacher, to set a new world record for xenophobia, hatred and the number of victims they can lead to," he added.

“This is clear to all the countries that have seen Nazism with their own eyes. All nations that have been labelled to be the third class, the slaves, they hear statements that exalt one nation. Our "never again" was not enough even for a century - evil was missed, it was revived.

All countries and peoples who support Ukraine understand this. The Poles, on whose lands the Nazis began their march and fired the first shot of World War II, have not forgotten. The British have not forgotten how the Nazis wiped Coventry from the face of the Earth, which they bombed 41 times. They remember London being bomed 57 nights in a row, and they saw cruise missiles fly to Mykolaiv, Kramatorsk, Chernihiv. The Dutch remember it. Rotterdam became the first city to be completely destroyed when the Nazis dropped 97 tons of bombs on it. The French remember it. They remember Oradour-sur-Glan, where the SS burned alive half a thousand women and childrenю They saw what the russians did in Bucha, Irpen, Borodyanka, Trostyanets, they saw how they occupied Kherson, Melitopol, Berdyansk and other our cities where people do not surrender and thousands come out for the peaceful rallies do not give up and are coming out," Zelensky continued.

“Also, the Czechs did not forget, where in less than a day the Nazis destroyed Lidice, leaving the ashes from the village. They saw Popasna destroyed. Even no ash left. The Greeks, who survived mass killings and executions, blockades and famines, have not forgotten. This is remembered by Americans who fought evil on two fronts.

And we are all going through new, no less difficult battles together. This is remembered by all Holocaust survivors - how one nation can hate another. Lithuanians, Latvians, Estonians, Danes, Georgians, Armenians, Belgians, Norwegians and many others have not forgotten. All those who suffered from Nazism on their land and won in the Anti-Hitler Coalition," Zelensky added.

“But there are those who, having survived all these crimes, today desecrated the memory of the feat. The one who allowed the shelling of Ukrainian cities from his land. Who spat in the face of his Immortal Regiment, placing executioners from Bucha next to it. But every evil always ends the same - it ends.

Dear Ukrainians. Today, on the Day of Remembrance and Reconciliation, we pay homage to all those who defended their homeland and the world from Nazism. We celebrate the feat of the Ukrainian people and their contribution to the victory ... They died so that we would know about it from books, not from our own experience. But it happened differently. This is unfair - in front of them all. But the truth will win and we will overcome everything. And the proof of this is called "Werewolf". This is the former headquarters and Hitler's bunker near Vinnytsia. And all that is left of him - a few stones. Ruins. The ruins of someone who considered himself invincible. This is a guide for all of us and future generations. What our ancestors fought for. And they proved that no evil will escape responsibility. He will not be able to hide in the bunker. He will end in collapse. So we will overcome everything, and we know this for sure, because all our military and people are descendants of those who defeated Nazism. So, they will win again. There will be peace again. Finally again. We will overcome the winter, which began on February 24, lasts on May 8, but will definitely end, and it will be melted by the Ukrainian Sun. And family and loved ones, friends and relatives will be together again. And our flag will fly over the temporarily occupied towns and villages. And we will get together. Finally again. And no more black and white dreams, but only a blue and yellow dream. Finally again. Our ancestors fought for this. Eternal honor to all who opposed Nazism. Eternal memory to all those who died during the Second World War, " - the head of state concluded.

This year, due to the war unleashed by the russians, there are no mass events in Ukraine on May 8 and 9. These days Ukrainians must be especially vigilant and should not ignore air alerts.