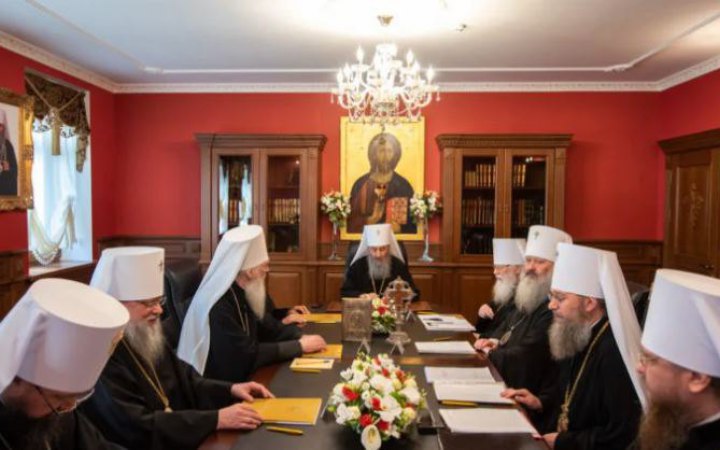 This is stated in the statement of the Holy Synod of the Ukrainian Orthodox Church on May 12, 2022

“Instead of uniting the people in the quest for victory and the restoration of peaceful life, the country's internal, religious front is heating up. Thus, a group of people's deputies of Ukraine, due to contrived and knowingly false accusations, submitted to the Verkhovna Rada of Ukraine bills banning the activities of our Church. In addition, in various regions of Ukraine, there are cases of local governments making illegal decisions to ban or restrict the activities of local religious communities of the Ukrainian Orthodox Church. With the silent consent or with the active intervention of local authorities, the seizure of churches of the Ukrainian Orthodox Church intensified.

We note with sadness that all these facts are the result of the erroneous religious policy during the presidency of P.O. Poroshenko and the destructive ideology of the so-called Orthodox Church of Ukraine. We are convinced that such activities of the previous government and the OCU became one of the reasons for the military invasion of Ukraine”, the UOC-MP said.

The Synod also believes that the decision to ban the UOC-MP can be described as an “act of national suicide”, as supporters of this church defend Ukraine both at the front and in the rear.

The UOC-MP has announced its intention to convene a meeting of bishops, priests, monks, and laity to discuss the problems of church life that have arisen as a result of the war.

As previously reported, the Speaker of the Verkhovna Rada Ruslan Stefanchuk stated that the bill banning the UOC-MP in Ukraine will not be considered during the war due to the threat of division in society. According to a poll, the majority of Ukrainians (51%) are in favor of the state banning the activities of the Ukrainian Orthodox Church of the Moscow Patriarchate.

Local authorities in various cities of Ukraine have begun to ban the activities of the UOC-MP. in particular, the mayor of Konotop, Sumy region Artem Semenikhin banned the activities of this church in the city, which he called the “FSB intelligence network”.

Subsequently, the Brovary City Council of the Kyiv region banned the Ukrainian Orthodox Church of the Moscow Patriarchate in the city for the duration of martial law.