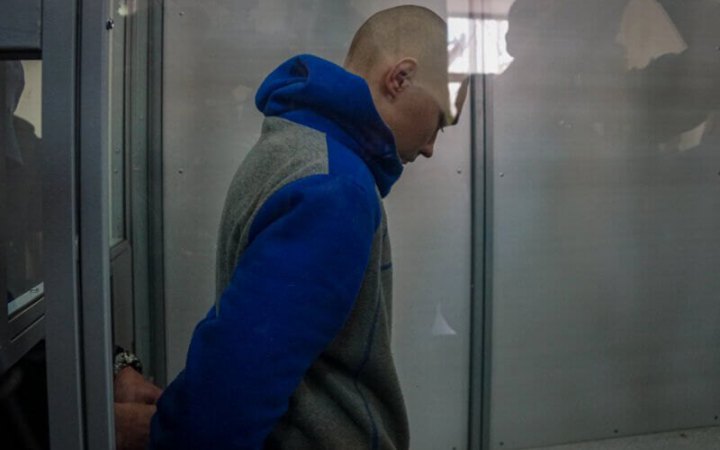 On 20 May, Solomianskyi District Court of Kyiv City resumed consideration of the case of russian military man Vadim Shishimarin, accused of violating the laws and customs of war, combined with the premeditated murder of Ukrainian civilian, Oleksandr Shepilov.

The hearing began with a debate, then the accused had the last word, reports LB.ua.

"We have a unique opportunity to follow the process, the indictment, which provides for punishment for violating the rules and laws of war. The uniqueness of the case is that the crime was committed not just by a foreign citizen but by a military man. Today there is a full-scale war between Ukraine and Russia. Despite the resonance of the case, I believe that all the evidence in the case must be carefully examined in order to make a fair decision," said Shishimarin's lawyer Viktor Ovsyannikov during the debate.

In his last words, the accused himself stated that he was ready to take his punishment.

"I would like to apologize again for what I did. I do not give up and I am ready to be punished and ready to accept all the consequences," said the military man of the occupying forces.

Shishimarin's sentence will be imposed on May 23 at 12 o'clock.

Preliminary hearings on Shihimarin’s case took place yesterday. The prosecutor's office requested life imprisonment for the accused. The victim, Kateryna Shepilova, the wife of the murdered man, said that she also believed that the accused deserved life imprisonment, but did not object if he was exchanged for defenders of Mariupol in Azovstal.

At a hearing on 18 May, Shishimarin pleaded guilty. He explained his actions by carrying out the order. During the hearing on Wednesday, it became known that on February 24, 2022, a column of Russian servicemen was moving into the Okhtyrka district of the Sumy region.

About 3 pm russian servicemen split into groups after Ukrainian troops broke up the column. Retreating, the russian military men Vadim Shishimarin, Igor Matisov, Makeev, Kalinin and Kolpakov seized a car near the village of Chupakhivka and drove into the village. Shishimarin, Kolpakov, Makeev and Matisov rode in the car, Kalinin rode in the trunk.

In the village, they met a local resident, 62-year-old Oleksandr Shepilov, who was riding a bicycle along the road. Shishimarin fired several shots at him, killing Shelipov. The cause of death was a gunshot wound to the head.

However, in the village, locals ambushed the russian servicemen and killed Kolpakov. Four other soldiers, including Shishimarin, hid on the farm and stayed there until 1 March. Then they surrendered to the locals.

Shishimarin is the first russian serviceman to stand trial in Ukraine for violating the customs of war. Article 438 of the Criminal Code of Ukraine provides for imprisonment from 10 to 15 years or life imprisonment.