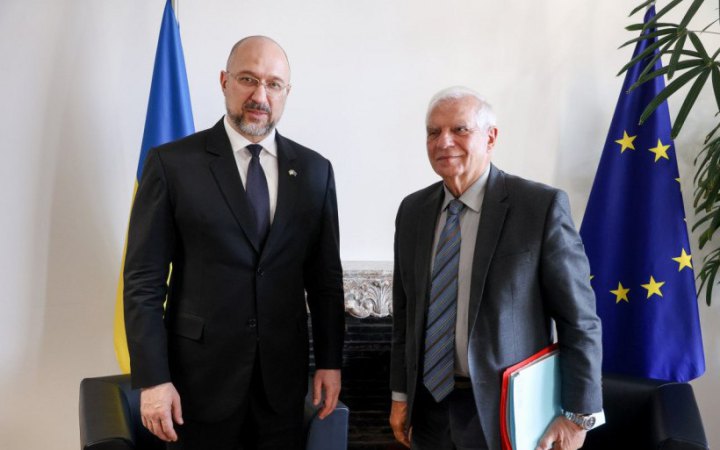 Military support for Ukraine, strengthening of sanctions and confiscation of russian assets were discussed during a bilateral meeting in Brussels by the Prime Minister of Ukraine Denys Shmyhal and the High Representative of the European Union for Foreign Affairs and Security Policy Josep Borrell, according to the Cabinet of Ministers website.

Shmyhal pointed out that since there were no signs that russia was ready to end the war, prompt and uninterrupted delivery of military aid proved extremely important.

"Ukraine is interested in your initiative to launch an EU military support mission for Ukraine within the framework of the Common Security and Defense Policy. Its principal objective should be the organization of basic and special training for Ukrainian servicemen. The structures of Ukraine and the EU should jointly work out this issue in order to deploy the mission as soon as possible," he said.

He thanked the EU for the consistent policy of strengthening sanctions against russia.

"We call on our partners to intensify work on the introduction of the 8th package, which would include a complete energy embargo and the disconnection of all russian and belarusian banks from SWIFT. Ukraine is now finalizing the list of proposals. When developing them, the most heinous crimes of russia were taken into account," Shmyhal noted.

The parties also discussed the strengthening of cooperation between Ukraine and the EU regarding the search, confiscation, and transfer of assets of the russian federation for the restoration of our state. The Ukrainian prime minister expressed hope that all member states would adopt relevant legislation at the national level as soon as possible.