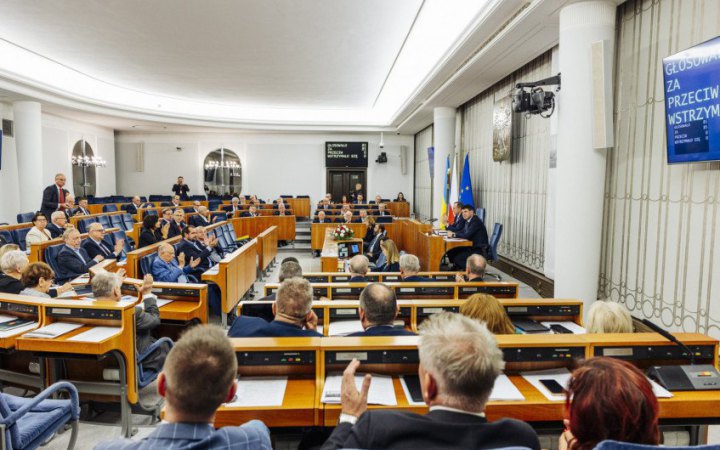 On Wednesday, 26 October, the Senate of Poland adopted a resolution on the recognition of the Russian Federation as a terrorist regime, the website of the Senate states.

The senators also stressed that on 24 February 2022, the armed forces of the Russian Federation "unleashed a brutal war against Ukraine, wishing to wipe this sovereign country off the map and destroy its nation".

The senators noted that "the heroic defence of independence by the citizens of Ukraine has been admired by the entire free world. Ukraine today is the most important place that defends democracy and freedom".

In the resolution, the senators wrote that the Russian occupiers terrorize the residents of Ukrainian cities by bombing peaceful objects.

"Bandits in Russian uniforms torture and kill prisoners of war and civilians in the occupied territories. They kidnap Ukrainian children to raise them as regime janissaries. They deport, relocate and send Ukrainian citizens to the distant periphery of Russia," the resolution reads.

All these acts of state terrorism in Poland are well known from history books, the senators noted. According to them, Europeans believed that they would never again be threatened by genocide and war crimes. Meanwhile, Vladimir Putin and his apparatus of violence have resumed the brutal practices of the Stalinist and Nazi regimes.

"That is why Russia must be defeated and deprived of the opportunity to threaten its neighbours," the senators called in the resolution.

Polish senators pay tribute to all institutions and organizations that have undertaken to investigate and document the crimes committed against Ukrainian society. They urge the international community to provide full support to the International Criminal Court, which is investigating the perpetrators of these crimes.

"In the resolution, the Senate would like to thank all the citizens of Poland, the government and local administration, non-governmental organizations and entrepreneurs for the tremendous assistance provided since 24 February to Ukrainians fleeing from Russian bombs, mostly women and children," the Senate website states.

On 18 October, the Estonian Parliament (Riigikogu) declared Russia a state-sponsor of terrorism.