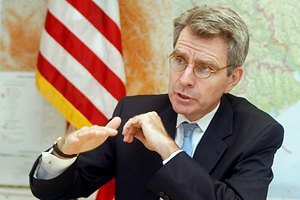 US ambassador Geoffrey Pyatt has suggested that the number one priority for Ukraine and Ukrainian society in 2016 needs to be prevailing in the war against corruption and economic cooperation, the US embassy has said in a statement.

In Pyatt's words, Ukraine's only "weapon" in hybrid warfare should be its successful development.