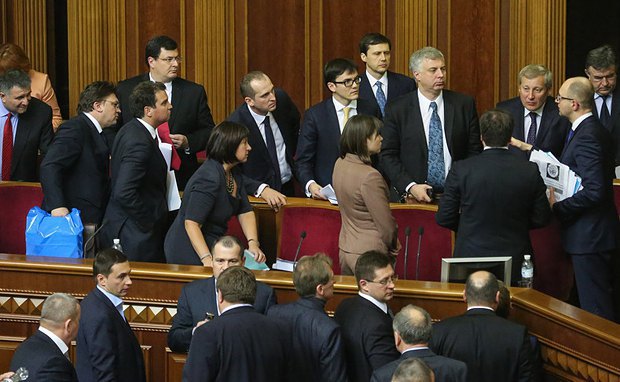 
Parliamentary and government crises in Ukraine are not something uncommon. The development of the country's political situation in principle can be viewed as transition from one crisis into another.

Evil tongues say we owe this vicious tradition of alternate manageable crises in Ukrainian politics to distinguished Leonid Danylovych Kuchma. This was his way of strengthening presidential powers and smoothing out annoying problems which threatened the stability of the presidential post. One would not be wrong to say: if the country has just got out of a parliamentary crisis thanks to the incumbent guarantor's efforts, one can expect a government crisis to follow. And vice versa.

Let us say with certainty that today's possible crisis, like any other in the recent years, has no architect and thus none of the subjects of the crisis situation controls it. What is more, anticipating a crisis situation, its potential participants rush to make it worse – for a simple reason of not losing the initiative. And that they do it at such a speed that they clinch with other subjects.

It would be wrong to say that the current situation did not have prerequisites or early signs. They were plenty. However let us pay attention to the fact that a sudden deterioration of relations within the power triangle had a somewhat unexpected context.

The president ran out of patience when the prime minister suggested a referendum on amendments to the constitution.

These are the amendments which are unpopular both with the Ukrainian society and politicians, however they are mentioned in the so-called Minsk agreements which were signed by no-one else but above mentioned Leonid Kuchma. 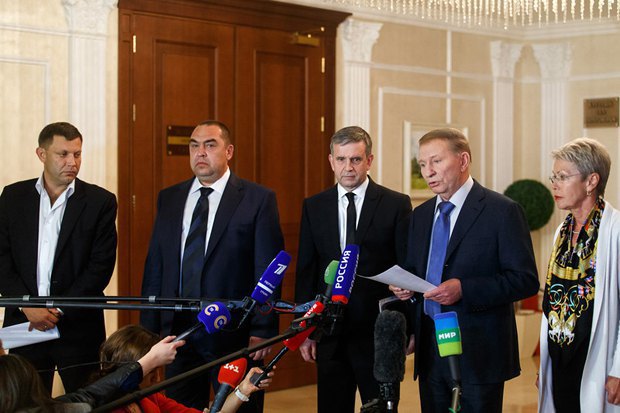 Let us remind the readers that the need to change the Ukrainian constitution was first mentioned by the former prime minister of the [self-proclaimed separatist] Donetsk People's Republic, Russian spindoctor Aleksandr Boroday, in his phone conversation with Igor Girkin, aka Strelok, on 14 April 2014, which was intercepted by the Security Service of Ukraine (SBU). In reply to Strelok's phrase that his fighters "minced someone serious", Boroday issued an instruction to put forward a "conceptual demand" for Ukraine's federalization "so that Rada [Ukrainian parliament] could not apply for foreign loans without two thirds of regions' votes".

Since then, Moscow has been consistently pushing for this "conceptual demand" with insignificant altercations through the events in Donbas and by means of the Minsk agreements. The alternative is the war, the Kremlin brings it home.

Putin's goal is to have a manageable political enclave in Ukraine in exchange for ending the war and resuming trade with Russia. Otherwise the Russian president does not need Donbas, which like a bottomless pit soaks in hundreds of millions of euro every month.

However this turn of events is obviously not what the Ukrainian authorities want. First of all, President Poroshenko who, should such changes to the Constitution of Ukraine be adopted, will lose his international political subjectness. Once the changes to the Ukrainian main law, with which Russia is infatuated, are adopted, Poroshenko will have to say good bye to phone talks with Merel, Biden and Hollande. 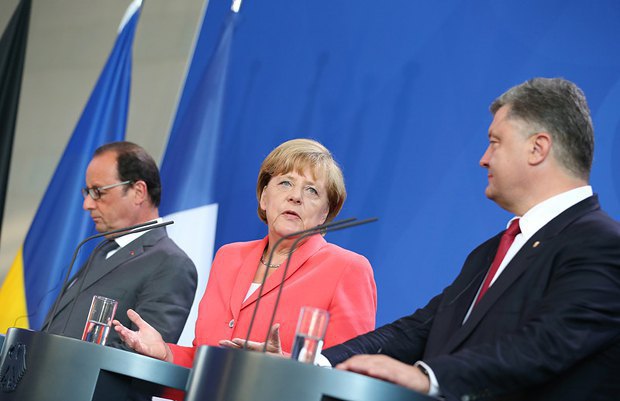 
With these very same Merkel, Hollande and Biden who have been incessantly demanding that Ukraine implement the Minsk agreements.

So why is the West "siding" with Russia? Why are they so unhappy with Ukraine failing to implement the Minsk agreements while neither of the sides had implemented even one clause?

What the West is most interested in is to get rid of the Ukraine factor in its relations with Russia. The point here is not the so much spoken about "fatigue" of the West with Ukrainian problems. There should be no vain hopes, Ukrainian affairs have been off the top agenda of the broad European and American public for about a year. As far as public security is concerned, the Middle East factor with its Islamic fundamentalism and migrants "getting out of control" have for long pushed wily Putin out of the consciousness of Europeans at least (which, for sure, can be described as a tactical success of the Russian foreign policy).

What is more significant is the interests of big Western business drooling at the sight of Russian shares, both the state and its monopolies, which slumped to a record-low level (Russia is already teasing the West with a possible privatization of VTB, Rosneft and Sberbank). Today's economic environment for the arrival of big foreign capital in Russia has never been better. The main obstacle to this is the sanctions, which are tied to the implementation of the Minsk agreements. By the way, one needs to invest in Russian assets before the Russian economy flops in full. And, by the way, this flop carries a risk that the Western banking system may lose 500-600bn dollars in loans issued to Russian companies.

Certainly, a large-scale economic arrival of the West in Russia is yet to be discussed and many political issues will have to be settled for this, but Ukraine in this discussion would be an odd man out. The statement that the implementation of the Minsk agreements would practically remove the Ukraine factor from relations between Russia and the EU and the USA was repeatedly mentioned on different levels.

But back to our muttons. Why did Prime Minister Yatsenyuk's referendum initiative rub President Poroshenko the wrong way? After all, this initiative is not aimed at implementing the changes to the constitution at all. On the contrary, it is yet another way of protracting this issue indefinitely, or even having it dropped from the agenda at all. 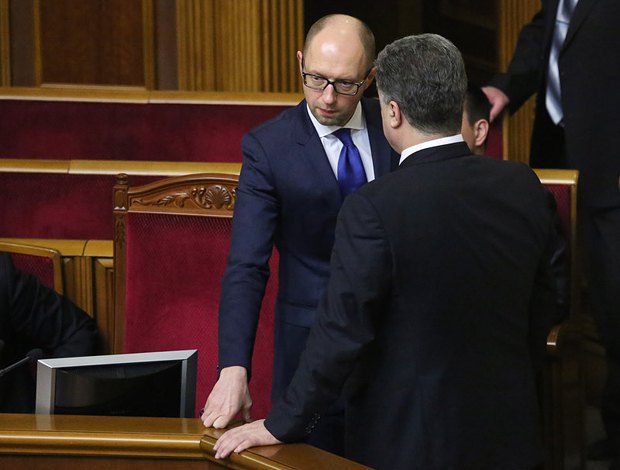 Let us emphasize once again that there is no demand for the changes to the constitution in the country at all. Budget decentralization, which has its own "locomotives" represented by regional elite representatives and owners of huge industrial facilities, does not require changing the constitution. Thus the only answer, and representatives of the political have practically said it out loud, is that the prime minister stole the initiative from the president.

A referendum as a way to oppose the constitutional changes is too good. It is far better than this process of turning to the Constitutional Court [to request an explanation to some allegedly dubious terms] and similar moves in the heart of the tactic employed by the propresidential political force.

This means that if the prime minister does not budge on his initiative, high "Western partners", who want the Minsk agreements to be implemented as soon as possible, will have to hold dialogue with him. And this is a direct attempt at the president's political subjectness.

However it would be naïve to think that Yatsenyuk was aspiring for international political subjectness when he made this statement. The prime minister is too concerned about maintaining the leverage over the processes within the country and protecting his post to be plotting foreign political strategies. These were his reasons for making a statement on the need for the people of Ukraine to express their direct will.

This thesis is also strong because it is very hard to confront it in public, very much like any other populist statement. For Yatsenyuk, it is nothing more than an attempt of successful PR and a trump card in his haggling with the president over the influence within the country.

Hence the sensitive reaction of the president who in fact threatened to raise the issue of confidence in the government through his representatives in parliament.

So what is going to happen? How will the crisis get settled?

Nothing and it will not. In fact, there will be no crisis because none of the subjects pursues the goal of strategically changing the distribution of power on the Ukrainian political arena (while those who have this goal – Tymoshenko, the Opposition Bloc – have no capacity to make it happen).

If the coalition does meet, one should not expect any strategic changes.

The initiators of this assembly are rather pursuing some tactical goals. And in every case their decision to call [Prime Minister Arseniy] Yatsenyuk on the carpet is dictated by their own goals. Some need to strengthen their own position in negotiations for vacancies in the Cabinet of Ministers. 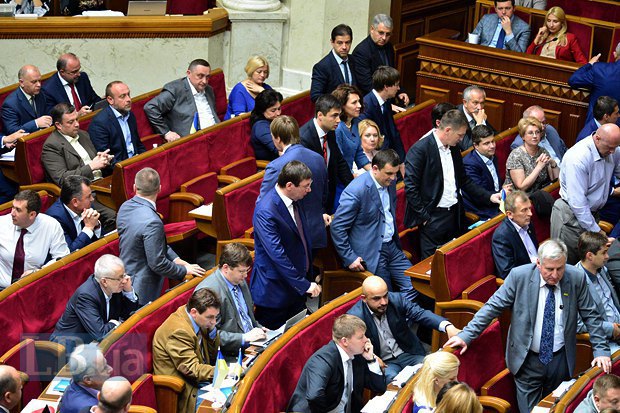 Some are continuing their political positioning by criticizing the government. Some, as is the case with the Petro Poroshenko Bloc, are regulating the length of the government's leash and bringing Yatsenyuk to reason with his ideas of a referendum.

As for the risk of a parliamentary crisis evolving into a government one, there are no true preconditions, or political demand for a change of status quo.

And in the longer term too, Let us suggest that there will be no government dismissal or parliamentary election this year. It may seem that the president is tempted to push Yatsenyuk and [Interior Minister Arsen] Avakov out of politics by means of a re-election to the legislative body (by all accounts, the electoral rating of the People's Front is hardly different from zero), however there is no certainty that the president's own political force can stand the test of a new election and at least repeat the previous results. And the need to build a capable coalition after a parliament reshuffle is the pain no-one wants to think about.

"Several years without elections" is a relief both for President Poroshenko and Prime Minister Yatsenyuk. This is what they share. Certaintly, this does not keep the prime minister from "trolling" the president with his ideas similar to that on a referendum, while the president can regulate the length of the government leash by arranging for the cabinet reports to parliament and coalition assemblies.

The constitution will not be amended. However, the changes will not be disregarded once and for all as well. There will be a common feeble "constitutional process" with inquiries to the Constitutional Court, a search of votes for the introduction of amendments (to no avail, of course), broad discussions on amendments, which would involve charged experts and ex-presidents (without a referendum, of course). 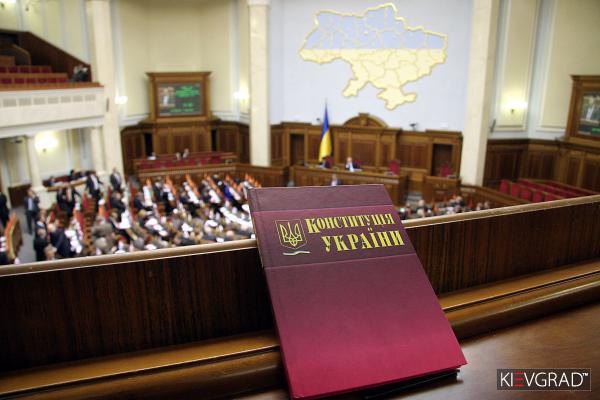 The West will prod, demand and insist; it will threaten with lifting sanctions from Russia and after all will do just that, at least partially. However it is not something that can scare the Ukrainian political and economic elite. On the contrary, Ukraine will readily lift its own sanctions from Russia because there may be more willing to do so than in the West

One should admit that the West does not have enough leverage on the Ukrainian authorities. It would cost them more to block the flow of loans. Otherwise it would automatically mean a default of Ukraine and its failure to pay back the already received billions of dollars.

Many would ask now: "So what about the president's desired subjectness? Will not he lose it by failing the undertaken commitments (which were undertaken by someone else, let's make a point) under the Minsk agreements?"

Not at all. This brings to mind a story when a leading Ukrainian political analyst, who was known for his love for sponsored trips abroad, criticized one of the European governments several years ago to the dismay of many. "What are you doing? They will not issue you a visa!" people told him. "Nothing like that. They will invite me even more often and will feed me at their own expense. They are democrats, after all," he answered. And it happened just like he said.

Fortunately, one should not expect a large-scale escalation in Donbas from Russia in response to the freezing of the Minsk process. Russia is certainly far more interested in having the sanctions lifted than the West. And Donbas, like a suitcase without a handle, will have to be dropped one day.