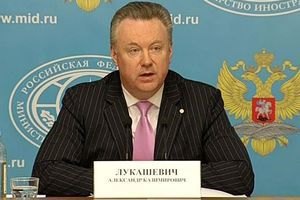 Russia's permanent representative to the OSCE, Aleksandr Lukashevich, said on the air of Russian TV on 26 January that Ukrainian servicemen had allegedly been ordered to leave the Joint Centre for Control and Coordination of cease-fire in Donbas in almost all the districts controlled by the self-proclaimed Donetsk People's Republic.

Lukashevich, who was repeating a statement made by the separatists on 23 January, interpreted this as a proof of Ukraine's plans to go on the offensive.

However, the ATO HQ denied his statement as untrue.

"Our side in the Joint Centre for Control and Coordination is working in its regular mode," ATO HQ spokesman Andriy Zadubinnyy told Interfax-Ukraine.

The centre was set up in September 2014 to control the implementation of cease-fire agreements. It includes Ukrainian and Russian servicemen.