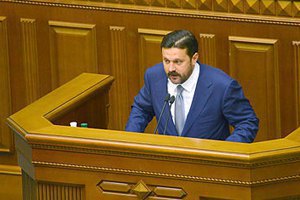 MP Andriy Derkach has announced leaving the parliamentary group People's Will of which he was a deputy head.

"Since I cannot take part in fixing political agreements with the incumbent authorities... I would like to announce that I am leaving the People's Will parliamentary group. I find it impossible for me to be involved in violations of constitutional rights of Ukrainian citizens by means of passing the 2016 state budget and the Tax Code which destroy the entire sectors of entrepreneurship and farming in exchange for posts and preferences, and participation in the corrupt schemes of the incumbent authorities," he said in a letter to speaker Volodymyr Hroysman.

According to information available to LB.ua, he had informed the group about his decision. He is likely to be replaced by Stepan Ivakhiv.

One of the reasons for his departure may be a scandal which broke out after it became known that the state budget bill was amended to delay the introduction of e-declarations. Derkach is believed to have authored the change.