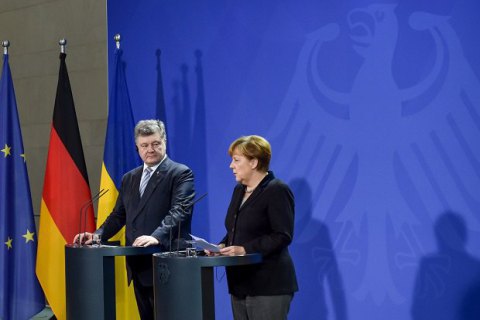 The negotiations between Ukrainian President Petro Poroshenko and German Chancellor Angela Merkel have produced some positive results. Chancellor Merkel, who defines the EU policy on the Ukraine crisis, not only expressed support for the Ukrainian position on the so-called Minsk agreements but also said that the early lifting of sanctions against Russia was not on the agenda, Gorshenin Institute vice-president Oleksiy Leshchenko has said.

"Whereas earlier Germany and France insisted that Ukraine should implement the Minsk agreements as soon as possible, in particular by amending the constitution and holding elecions on occupied territories, now Merkel accepted Kiev's position that Ukraine would not implemet the Minsk agreements unilaterally when a cease-fire is violated by the aggressor on a daily basis.

"An open and enforced attempt by Russian propaganda to influence the public opinion in Germany over the past three weeks was a good backdrop for forming Merkel's position. As a result, Russia is suspected of using the migration crisis, the story of Russian "girl Liza", trying to undermine Germans' trust in Chancellor Angela Merkel," he said.

Experts of Gorshenin Institute also believe that the domestic political environment in which Angela Merkel is operating is also important. "Our German colleagues believe that Putin may be trying to place his bets on Vice Chancellor Sigmar Gabriel, who heads the Social Democratic Party of Germany (SDPG), the main competitor of Merkel's party," Leshchenko said. "The SDPG spares no efforts to criticize the chancellor for her tough position on Russia and any softening of Merkel's rhetoric regarding Moscow will look like a weakness and her opponents' victory."