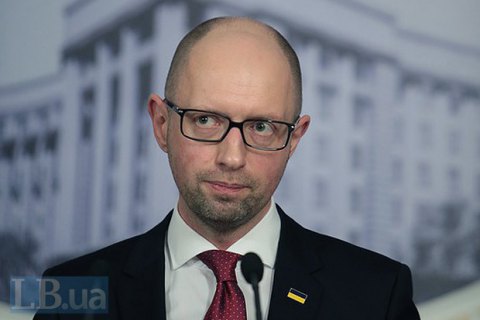 Prime Minister Arseniy Yatsenyuk has described the resignation of Economic Development and Trade Minister Aivaras Abromavicius as "desertion". He was speaking at a government meeting on 3 February.

"I appreciate the position of all those boys who, under political pressure, were forced to tender their resignations. However I am sure we have come too far and their resignation now is an attempt to abandon the battlefield whereas what we need now is to fight. Because the forces that want things to return to what they were - to quietly carve up state companies and appoint new loyal ministers - are only applauding this," he said without naming anyone.

He added that his parliamentary faction would discuss all the resignation requests (among them by Infrastructure Minister Andriy Pyvovarskyy, Information Minister Yuriy Stets, Agrarian Policy Minister Oleksiy Pavlenko and Health Minister Alexander Kvitashvili) one by one. Decisions on them will be made with regard to the ministers' performance.

"My position is as follows: we will continue to fight and work. If someone from the factions represented in parliament is not happy about it, it is their constitutional right to submit a resolution of no confidence in the government, find a majority and undertake full responsibility. They may have different programmes, better approaches and people. Or this may simply be a fight for power and flows," he said.

Abromavicius tendered his resignation in protest against what he described as interference in the work of his ministry by Ihor Kononenko, one of the president's closest allies. Kononenko dismissed the allegations.