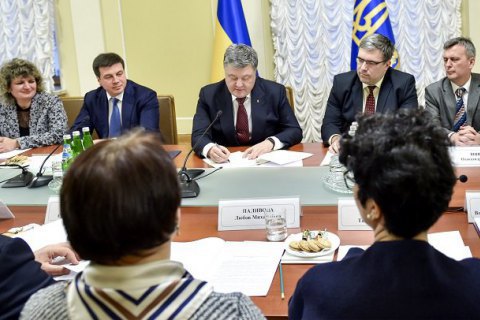 In the course of a meeting with NGO representatives, President Petro Poroshenko signed a decree to facilitate the development of civil society, the president's press service has said.

The president emphasized that the Revolution of Dignity had provided new opportunities for civil society development and deepening democracy in Ukraine. In particular, he highlighted the contribution of volunteers in support of the Armed Forces and defence reform.

He also drew attention to the active participation of the public in the European integration processes and improvement of public sentiments with regard to European and Euro-Atlantic integration.

"The role of civil society is crucial for both European integration and national defence," he said.

The president underlined the role of the public in state reformation.

"Probably the second most important sphere of reforms is anti-corruption legislation. Irrespective of the attitude towards criticism, the authorities should learn to cooperate with the public to build trust within the country and demonstrate this cooperation to the world,” he said.

The president said he was disappointed by the delay in the establishment of the National Agency for Prevention of Corruption. Virtually, as it is the only remaining institutional issue that needs to be resolved for the EU to lift visas for Ukrainians.

The president urged the public to support and demonstrate proactive stance on constitutional amendments in terms of judicial reform.