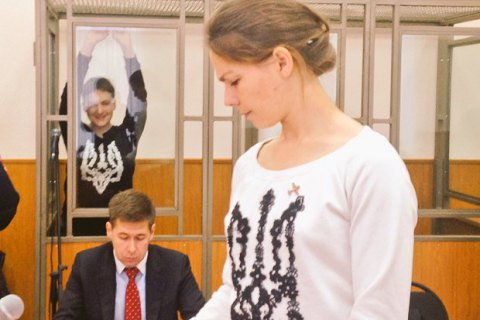 Ukrainian pilot Nadiya Savchenko stopped dry hunger strike after the court hearing on 9 March, but not after receiving the fake letter allegedly from President Petro Poroshenko, her sister Vira Savchenko has said on the air of the "112 Ukraine" news agency.

"Savchenko stopped hunger strike on 9 March just after the hearing, she had made that decision before receiving the letter. The President wrote letters and before, he is in touch with the family," the sister of the Ukrainian being detained in Russia said.

According to Vira Savchenko, the aim of the letter was an attempt to cause a quarrel between the sides of the hearing.

"The aim is to provoke a conflict between us. For the consuls to have a quarrel with the lawyers, for Kiev to shout at the consuls. This operation had been prepared before," Savchenko stated.

The sister also said that Savchenko’s state is still unknown.

"Ombudsman Ella Pamfilova got in touch with the the consul in Moscow and said that since Monday she would find out why the doctors had not been let in as everything was alright. I will have to write a petition to examine Nadiya and so on. Roughly speaking, the Kremlin "is posing as a fool" and pretending that "oh, were the doctors here? Why didn't you say?" Vira added.

As reported before, Ukrainian doctors left the territory of the Russian Federation on 12 March without seen Nadiya Savchenko who is on hunger strike.

Savchenko declared a dry hunger strike since 4 March and stated that only Ukrainian or European doctors could examine her. On 10 March, she said that she would follow the received written request from Petro Poroshenko and would drink water. Nevertheless, as it turned out later, Poroshenko had not written that letter to Savchenko. Russian prankers said these were them. The Ukrainian lawyers see here the hand of the FSB (Russian Federal Security Service).