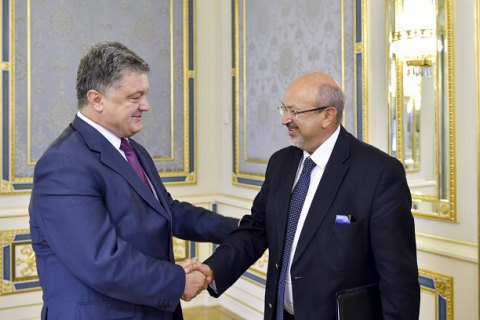 "Today, the OSCE faces unprecedented challenge when the aggression of one state-participant against Ukraine has virtually invalidated heritage of the Helsinki Final Act," Poroshenko was quoted as saying.

The parties have discussed the intensification of the international presence in the region, first of all, through the deployment of the OSCE armed police mission in Donbas.

The president drew attention to Russia’s continuous supply of military equipment, armament, regular troops and mercenaries across the uncontrolled part of the Ukraine-Russia state border.

In this context, the key value is attached to the fulfilment of the Minsk agreements’ provisions regarding the establishment of constant monitoring over the temporarily uncontrolled area of the state border by the OSCE, the website said.

Poroshenko said the OSCE potential should be used in full to terminate the brutal violation of rights of Ukrainian citizens in the occupied areas. The parties particularly discussed the issue of prompt liberation of hostages and political prisoners illegally detained in Russia and the occupied territories.

The president thanked the OSCE SMM representatives in Donbas who continue to perform the mandate of the Mission despite provocations by pro-Russian militants.