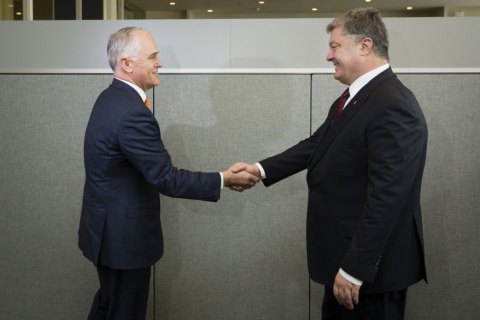 In the course of the 71st session of the UN General Assembly in New York, President Petro Poroshenko held a meeting with Prime Minister of Australia Malcolm Turnbull.

According to Poroshenko's press service, the parties praised active development of Ukraine-Australia cooperation noting successful implementation of the agreements achieved following the visit of Petro Poroshenko to Australia in December 2014.

The prime minister of Australia expressed support for Ukraine’s state sovereignty and territorial integrity of Ukraine. The president expressed gratitude to Australia for clear and unchanged position.

Petro Poroshenko and Malcolm Turnbull discussed the issues related to the MH17 tragedy and coordinated further joint efforts on determining an optimal international legal mechanism to bring the perpetrators of that terrorist attack to justice.

The parties agreed to elaborate the mechanism of mutual visa liberalisation between Ukraine and Australia.

The president of Ukraine noted that the year of 2016 was especially important for the Ukrainian community of Australia, which celebrates the 70th anniversary of its arrival in Australia.

Poroshenko invited Malcolm Turnbull to visit Ukraine at his convenience.