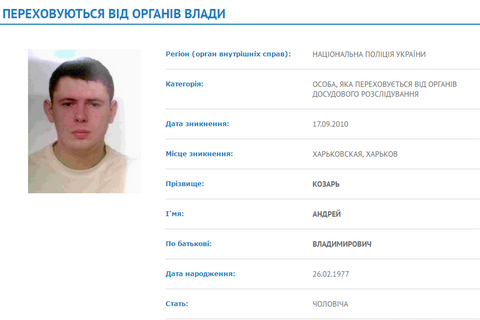 The man who accompanied Oplot chieftain Yevhen Zhylin when he was killed in a Moscow suburban restaurant on 19 September was a former officer of the Kharkiv department for fighting organised crime, Andriy Kozar.

Kozar, who was wounded during the attack, is suspected of killing the editor of the Kharkiv-based newspaper Novyy Stil, Vasyl Klymentyev, MP Anton Herashchenko said on the air of 112 Ukrayina TV.

"The man named Andriy Kozar is also wanted. He is suspected of organising the abduction and murder of Kharkiv journalist Klymentyev in late 2000s. He has been wanted for six to seven years. He is known to live in the Russian Federation and, I think, just like Zhylin, he cooperated with Russian special services in exchange for not being deported to Ukraine," Herashchenko, who is also an aide to the interior minister, said.

Vasyl Klymentyev was killed in 2010.

On 11 August 2010, he left home with an unidentified male person on a silver BMW and never came back. A year later, police declared two suspects possibly involved in his disappearance wanted. One of them was a former police officer, Andriy Kozar.

In August 2012, the then head of the Ukrainian Interior Ministry's investigations department, Vasyl Farynnyk, said that the murder case was solved and that Kozar was the main suspect.

Investigators believed Klymentyev got killed because of his professional activities. His newspaper exposed corruption in law enforcement.