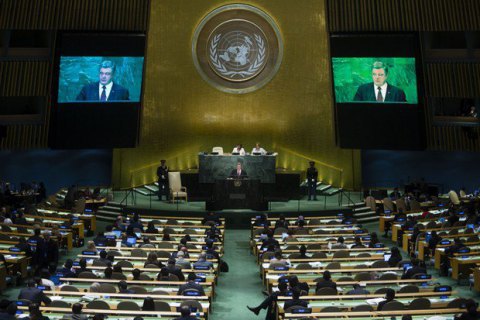 President Petro Poroshenko has said in his speech to the 71st UN General Assembly in New York that the guarantor countries did not secure Ukraine's territorial integrity despite their commitments under the 1994 Budapest Memorandum.

"Ukraine voluntarily dismantled its own nuclear arsenal, the third largest in the world at the time with from 2800 to 4200 tactical nuclear warheads, in exchange for security, sovereignty and territorial integrity assurances under the 1994 Budapest Memorandum," he said.

Poroshenko went on: "Regretfully, all these assurances remained just a piece of paper. Let’s be frank, we failed to pass exam with the Budapest memorandum. Then democratic world lost its first battle – it was not only about Ukraine, but also about credibility of agreements."

Ukraine's borders and security were guaranteed by the USA, the UK and Russia during the signing of the so-called Budapest Memorandum in 1994.

In 2014, one of the guarantor countries annexed Crimea and its troops invaded Donbas. Russia believes it has not violated the Budapest Memorandum because it does not threaten Ukraine with nuclear weapons.

The USA and the UK offered Ukraine limited help in protecting its territorial integrity. In particular, they refused to supply it with lethal weapons.