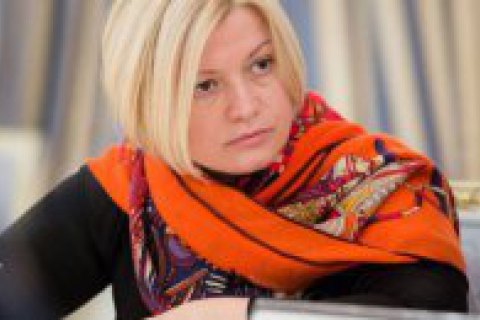 Ukraine's first deputy speaker and the country’s representative in the humanitarian subgroup of the trilateral contact group in Minsk Iryna Herashchenko has said that no bill on elections in Donbas is being worked out during Minsk talks, an UNIAN correspondent reports from a parliament briefing.

"The Ukrainian side is seriously working on de-escalation of the conflict," said Herashchenko. She noted that "no election law is being worked out" in Minsk. "The political subgroup only discusses the modality of elections and no compromise on any of the modalities has been reached," the deputy speaker said.

As UNIAN reported earlier, the OSCE special representative in the Trilateral Contact Group on Donbas conflict settlement Martin Sajdik said that the political subgroup was discussing the elections in Donbas under the formula proposed by German Foreign Minister Frank-Walter Steinmeier. On January 27, 2016 the representative of the Russian Federation to the TCG Boris Gryzlov said that the amendments to the Ukrainian Constitution should provide for granting "a special status" to the areas of Donbas temporarily occupied by Russia on a permanent basis, under the so-called "Steinmeier formula". "Voting for the Constitution of Ukraine should be tied firmly to the simultaneous adoption of the amendments to Articles 1 and 10 of the law on the special status for granting the special status a permanent basis under the "Steinmeier formula" said Gryzlov. In addition, in his opinion, the amendments to the law on the special status of Donbas should be agreed upon in the Trilateral Contact Group. At his, the authority of the officials to be elected in the upcoming elections in Donbas should not be stopped in 2017.

On the request of UNIAN, the press service of the Embassy of the Federal Republic of Germany in Ukraine said that Steinmeier’s proposal concerned the introduction of a special regime of self-governing in Ukraine together with the holding of local elections. The German Embassy did not deny that Steinmeier had offered within the Minsk process a plan for the local elections in Donbas. At the same time, the embassy did not confirm that it was about the "special status" for Donbas on a permanent basis, while the powers of local authorities, elected in potential election should not be discontinued in 2017.