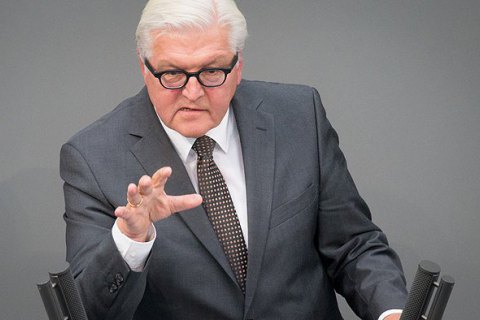 German Foreign Minister Frank-Walter Steinmeier the appearance of deputies of the Russian State Duma, elected in Crimea the walls of the PACE would be "unacceptable".

"In my opinion, we can not accept in this house as the representatives of the Russian deputies elected to the State Duma in the territory of the illegally annexed Crimea," Ukrinform quoted Steinmeier as saying at the PACE session in Strasbourg on Thursday, 13 October.

He stressed the need to clearly state this at the EU level and develop general rules in this context. "Parliamentary dialogue and mutual understanding are important and relevant, but only if they remain faithful to the fundamental values and the Statute of the Council of Europe," the diplomat said.

At the same time, he noted that the importance of parliamentary debate in the days of political differences, including with Russian MPs. In this context, the role of the PACE as a common forum is crucial, because it sets the rules to be followed by all. Steinmeier expressed hope that "Russian delegation will soon be able to re-engage constructively in the sessions and work of the Assembly."

The head of German diplomacy also supported the efforts of the Secretary General Thorbjørn Jagland aimed to ensure continued access to Crimea of the observers of the Council of Europe , so that they can on the ground assess the human rights situation.

In the previous day, the PACE recognized null and void the results of elections to the State Duma of the Russian Federation in Crimea.