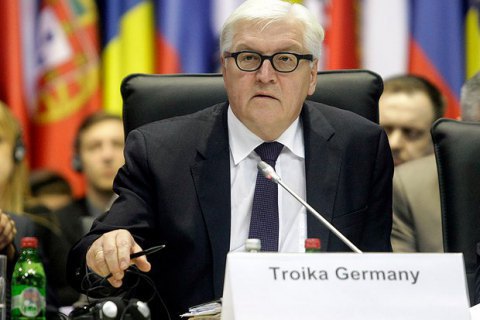 German Foreign Minister Frank-Walter Steinmeier says the conduct of elections in the occupied territories of Donbass is now impossible.

"At the moment we cannot talk about the elections but, as I have pointed out in my address, I think that at the moment we do not have an effective alternative to the Minsk Agreements," he told reporters after an address at the Parliamentary Assembly of the Council of Europe in Strasbourg on Thursday, 13 October.

He noted that, for all the complexity of the problem, it is necessary to develop a framework for the implementation of certain elements of the Minsk agreements, and it is imperative to ensure the truce, which is regularly violated. The head of German diplomacy expressed hope that the parties will implement the agreement on the disengagement of forces and weapons, which in turn will help stabilize the ceasefire.

Steinmeier stressed that it is even more difficult to work out a political package that includes three bills - on a special status, amnesty, and local elections. He also noted that so far it is impossible to reach a consensus on this draft legislation, but called for continued efforts to achieve this.

"I hope that we can create the conditions to agree on an applicable law (for the elections - Ed.). When the law is agreed, it is necessary to ensure some security for the elections, which also requires a lot of work and great art of persuasion," said the politician.

He admitted that it is too early to talk about such conditions, but this does not mean that the parties cannot work on it.

The election in Donbas is one of Ukraine's commitments, laid down in Minsk Agreements. However, Ukraine insists that first a complete ceasefire at the front must be achieved and armed OSCE police mission be deployed.

Donetsk and Luhansk "republics" earlier announced plans to hold "elections" on October 18 and November 1, 2015, respectively, but after the meeting of the "Normandy Quartet" in Paris agreed to postpone and kept postponing the date of elections. The most recent announced date is on 6 November, 2016. In the meantime, the militants continue to violate the ceasefire.

French President Francois Hollande, speaking at the autumn session of the PACE called on Ukraine to hold local elections in Donbass, and only then restore control over the state border. In his view, the failure of the Minsk agreements can lead to an indefinite "freezing" of the armed conflict.

The position of the Ukrainian side in this matter remains unchanged: no elections can be held in Donbass before a comprehensive ceasefire and disengagement.