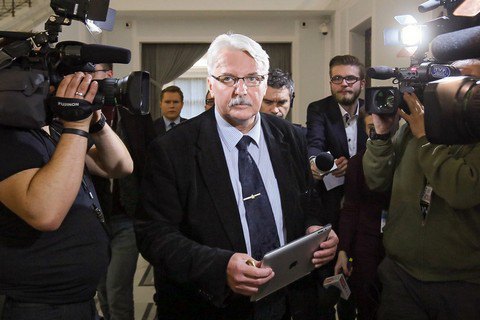 The proposed by the Netherlands draft declaration of the EU member states with reservations to the Ukraine-EU Association Agreement is hardly acceptable for Poland, the head of Polish diplomacy Witold Waszczykowski told reporters in Brussels on 12 December.

"For us it is hard to accept. If it were not to lead to membership at some point in the future, then why bother with all that?" " he added.

"For now of course the prospect of Ukraine's membership is quite distant. But one day, after Ukraine implements all the provisions of the association (and) introduces all the EU recommendations, we will return to this issue," Waszczykowski concluded.

Previously, the media promulgated prepared by the Dutch draft EU resolution on the association with Ukraine.

The draft Dutch document says the Ukraine association agreement "does not contain an obligation for the Union or its member states to provide collective security guarantees or other military aid or assistance to Ukraine", and nor does it require additional EU financial support of Ukraine from the European Union.

Neither of these specifically promised to Ukraine in the agreement but the Dutch want them clearly placed off-limits in order to reassure their voters.

Netherlands - the only EU country that has not ratified the agreement on association of Ukraine and the EU, as the Dutch rejected it in a referendum in April.

Agreement previously entered into force, however, the Netherlands threatened to break it, if EU leaders do not support the additional conditions set forth Hague. EU summit resolution will give the premiere of Mark Rutte opportunity to address the parliament to approve the agreement with Ukraine, despite the results of the referendum.