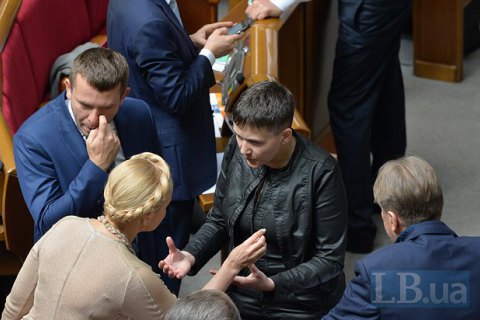 "She has left the party a few weeks ago, but we did not want to make it public," Krulko told the agency Interfax-Ukraine on Tuesday, 13 December.

When asked whether Savchenko was still a member of the Fatherland faction in parliament, Krulko responded in the affirmative.

On 12 December, Fatherland said that Savchenko was not coordinating her actions with the faction and the party.

Previously, Savchenko met with the chieftains of D/LPR in Minsk.

She said it happened when Savchenko went to Russia to attend the process on Ukrainians Karpyuk and Klykh "Why the party has decided to talk about it now?" Vira wrote on Facebook Tuesday.

The session of the Supreme Court of Russia, which confirmed by sentences to Karpyuk and Klykh for the alleged murder of the Russian military in Chechnya in 1994-1995, took place on 26 October.