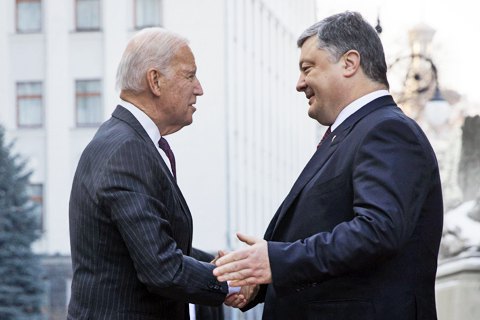 US Vice President Joe Biden called on Ukraine to continue the fight against corruption, cooperate with the IMF and carry on with tough reforms.

"I want to encourage the people of Ukraine: continue to demonstrate your commitment to the rule of law, continue the fight against corruption, insist on transparency, judicially investigate officials who plunder public funds to enrich themselves... Continue to work with the IMF to implement tough reforms ensure the stability of the economy," Biden said at joint with President Poroshenko press conference on 16 January.

US Vice President acknowledged that Ukraine is so far unable to fulfil its obligations in the political part of the Minsk agreements, which provide for the elections in the occupied part of Donbas and give special status to the territories.

"The political part of the agreement could not be implemented before the violence on the part of Russia stops. Only after Russia and its proxies in the East fulfil their obligation to end the fire, and let Donbas again enjoy peace and security can Ukraine be expected to fulfil its political commitments."

The inauguration of the new US president Donald Trump is slated to take place on 20 January. Indiana Governor Mike Pence will assume the post of the secretary of state.