The internet publication Ekonomichna Pravda published on Monday an updated list of requirements of the International Monetary Fund for Ukraine, conditioning the issue of further IMF tranches. 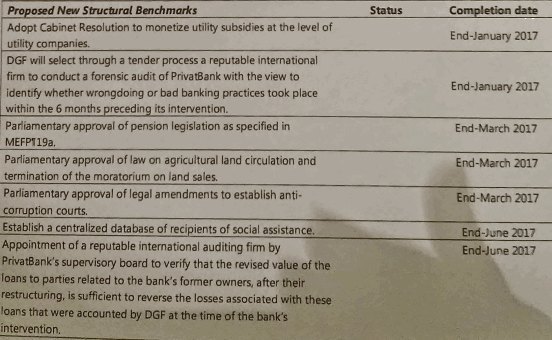 "The mission of the International Monetary Fund in the coming weeks may recommend to the Board of Directors of the Fund to hold the third revision of the EFF program," the publication quoted the Fund's official representative Jerry Rice as saying recently.

However, the new commitments that Kyiv should comply with to continue cooperation may prove to be painful, as follows from an updated draft memorandum on Ukraine's cooperation with the IMF that EP got hold of.

Ukraine's Cabinet before the end of January 2017 should decide on the monetization of subsidies, while the Deposit Guarantee Fund should order an audit of Privatbank's work in the last six months before the nationalization.

Before the end of March 2017, the parliament must also pass a bill on agricultural land market and terminate the existing moratorium on its sale; and legislate on the establishment of anti-corruption courts.

By the end of June 2017, Ukraine should establish a central database of recipients of social assistance, and also by that time, Privatbank's supervisory board must appoint a reputable international auditing form to delve into the loans issued to parties related to the former stakeholders of the bank.

The previous version of the memorandum between Ukraine and the IMF was published in September 2016.