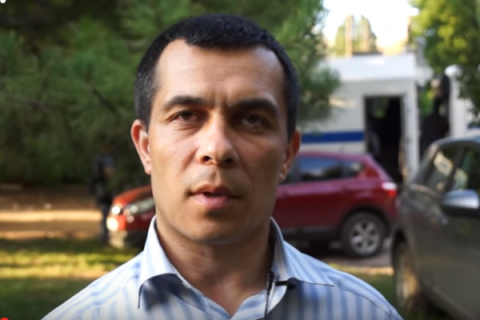 In Russia-occupied Bakhchysaray, the officers of the Russian Federal Security Service (FSB) detained Emil Kurbedinov, who is a lawyer of several defendants in the case of Hizb ut-Tahrir and journalist Mykola Semena.

"The pressure on lawyers is piling up as the office of lawyers Emil Kurbedinov and Eden Smedlyayev is being searched, Emil has been detained in Bakhchysaray," the head of the Crimean Tatar Qurultay electoral body, Zair Smedlyayev, reported on Facebook on 26 January.

Kurbedinov posted a video showing FSB officers approach the car which was taking the lawyer and his colleague to the house of Seyran Saliyev, which is currently being searched.

"We have just been detained by the traffic police. We have been heading for Saliev's house being searched," Kurbedinov said.

Mykola Polozov, a lawyer for Ilmi Umerov and Akhtem Chyyhoz, was detained and interviewed by the FSB in Simferopol on 25 January. Polozov, who described his own arrest as "kidnapping", was released after several hours.

Later on 26 January, Polozov said that a court in Crimea issued a 10-day administrative arrest warrant for Emil Kurbedinov.

"This is the last call before they put him in jail if he continues with his work as before," he said on Facebook.