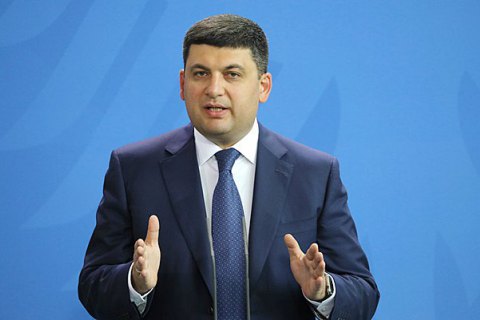 Prime Minister Volodymyr Groysman has pledged full support for major domestic manufacturers and promised to protect them from the pressure of tax authorities, the National Bank of Ukraine (NBU) and other state agencies.

"Companies [like Ukrlandfarming] need help to become even stronger. These companies are national. They employ dozens of thousands of people, who earn wages and manufacture products. Our task is to develop and facilitate," Groysman said during a visit to Khmelnytskyy Region. He was answering a correspondent's question about the NBU's alleged pressure on the agricultural holding Ukrlandfarming and the companies of businessman Kostyantyn Zhevaho.

Groysman said that he had not discussed the situation with NBU governor Valeriya Hontareva yet but promised to do so shortly. Meanwhile, he asked the Office for Support of Investment to look into the matter at hand.

"My philosophy and ideology are to help those who create jobs," Groysman said. He pledged to spare no effort to help the real economy.

Earlier, Bakhmatyuk called on the president and the prime minister to intervene in his company's conflict with the NBU head. The businessman said that his company had for over 2.5 years been exposed to unfriendly takeover attempts, defamation and legal attacks, as well as financial pressure from the NBU.

He accused Hontareva of sharing false information about the shareholders of the holding, which had a ruinous effect on the company which employs 37,000 people. It also poses a threat to the economic stability of the country, he added.

Bakhmatyuk said that the NBU in 2014 caused a gap in the balance sheets of Finance Initiative and the VAB, banks affiliated with Ukrlandfarming, and then declared them insolvent. The NBU's actions were proved illegal by courts of three instances, he said.

During a meeting with representatives of the government and the presidential administration, Ukrlandfarming put forward a plan of debt restructuring.

However, the NBU turned down the proposal and gave the media false information about Bakhmatyuk's 38bn-hryvnya debt to the state, according to Bakhmatyuk.