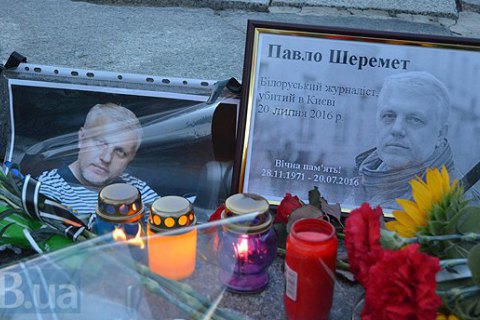 The priority version in the investigation into the murder of journalist Pavel Sheremet last July was his professional activity, the deputy head of the National Police Oleksandr Vakulenko said during an appearance on the TV channel 112-Ukraine on 8 February.

"The investigation has discarded versions that have been repeatedly voiced: an error in the assasination object as well as personal conflicts. As of today, the investigation views the professional activity of Sheremet as a journalist both in Ukraine and abroad as a priority motive behind the killing," Vakulenko said.

The journalist died of traumatic shock and significant blood loss minutes after the car bomb explosion, he said.

Pavel Sheremet was killed in the morning of July 20, 2016 as a result of the explosion of his car in the downtown Kyiv. The car belonged to the head of the Internet publication Ukrainska Pravda Alyona Prytula, who wasn't in the car.

The police classified the explosion as murder. US experts of the FBI are involved in the investigation. Almost immediately after the murder, a video featuring the placement of a bomb under the bottom of Sheremet's car by unidentified individuals was posted in the Internet.