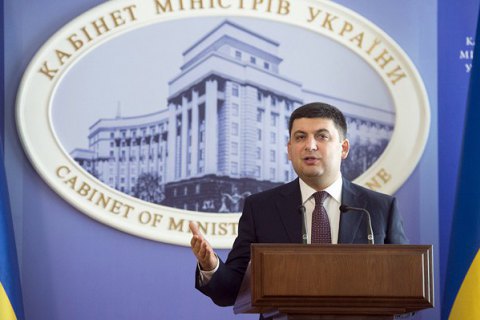 Prime Minister Volodymyr Groysman called on all interested parties to a professional discussion and joint work to deal with emergency situation in the energy sector and the issue of "coal blockade".

"All state institutions and political forces that have to do join efforts and take responsibility for the implementation of a specific plan of action in the legislative and executive spheres. [...] I urge anyone who is really interested in resolving this set of problems to take part in a professional discussion and teamwork. The government is ready to become a platform for such work," the prime minister wrote on Facebook on Monday, 19 February.

Groysman said that the government has made and will further make every effort to minimize the impact of the current crisis.

Groysman's post was a response to a joint statement by representatives of influential non-governmental organizations, which have outlined their position on the so-called "coal blockade."

"I can agree or disagree with specific assessments and recommendations made in the statement, but I cannot but agree with the position of principle – we must determine a clear-cut state policy on energy and the occupied territories to put an end to speculation and abuses in this sphere," said the prime minister.

In a joint statement, a number of civil society organizations and think tanks, posted on the Hromadskyy Prostir website, called on the government, the president and the Verkhovna Rada to consolidate efforts and jointly search for solutions of the fundamental problem ensuring the energy security of Ukraine.

The statement says the current approach to formation of tariffs for wholesale market price of electricity is unacceptable, as it contains significant risks of corruption and does not encourage stable operation of the national power system.