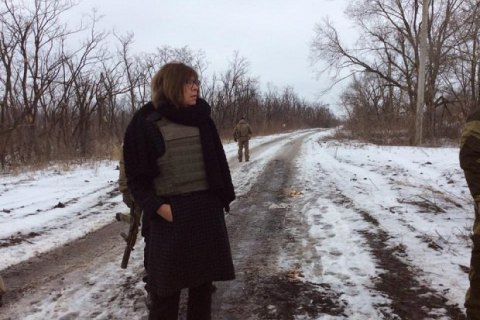 Over the past day, Russia-backed militants carried out 74 attacks at the positions of Ukrainian army in Donbas. As a result, two soldiers were injured, and seven sustained injuries, the ATO press center reported on Facebook Tuesday, 21 February.

Despite the overall reduction of tension along the frontline in the first half of the day, the enemy later resumed shelling using 120-mm mortars.

In the Donetsk sector, enemy 120- and 82-mm mortars shelled Novoluhanske, Avdiyivka, Luhanske, Zaitseve and Troyitske. The terrorists fired heavy machine guns and small arms at Avdiyivka, Pisky, Novoselivka, Verhnyotoretske, Kamyanka, Luhanske, Zaitseve and Zhovte. Opytne and Luhanske were repeatedly shelled by an enemy IFV. Enemy snipers were spotted in the area of Avdiyivka.

The Trilateral contact group on Donbas settlement early this month reached an agreement on the pullout of heavy weapons and the beginning of the truce by 20 February. However, the headquarters of the ATO reported on Monday morning that militants continue attacks making the weapons withdrawal impossible.