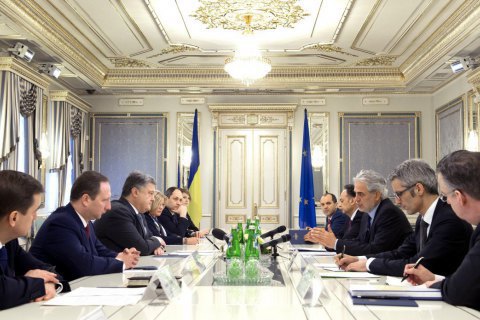 President Petro Poroshenko said that the decision of Russian President Vladimir Putin to recognize documents issued to Ukrainian citizens by the terrorist organizations "DNR" and "LPR" amounts to Moscow's pullout from the Minsk process.

"We can see not only ceasefire violation, but also absolutely cynical decision to recognize fake documents of fake republics," the president said a meeting with EU Commissioner for Humanitarian Aid and Crisis Management Christos Stylianides.

"In terms of international law, this is already an element of recognition of these illegal formations and, de-facto, rejection of the Minsk process, for these steps are incompatible with the implementation of the Minsk agreements. We think it is an extremely alarming phenomenon that requires decisive action up to the enhancement of sanctions. "

EU Commissioner Stylianides who has just returned from Mayorsk, urban-type settlement on the frontline, clearly emphasized that the EU continues to fully support Ukraine and exert considerable diplomatic efforts aimed at full implementation of the Minsk agreements by Russia based on unconditional respect for sovereignty, territorial integrity and independence of Ukraine, presidential website said.