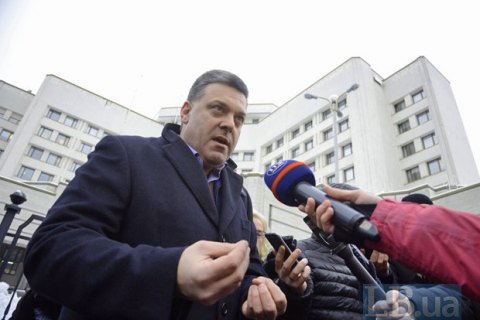 The united nationalist forces set a list of national interests that the government must protect, otherwise it is in for a complete reboot, the leader of the Svoboda party Oleh Tyahnybok said on the TV channel 112-Ukraine on 23 February.

He accused the country's leadership of the failure to fulfil the objectives of the Maidan and said that this government may bring even more damage to Ukraine.

"On February 22, the day the Maidan protests ended, the united nationalist forces identified a set of national interests, the red line, which the authorities would not dare to cross," said Tyahnybok.

Among the requirements of the right, the leader of Svoboda named the cessation of trade with the occupied Russian territories in Donbas and the aggressor state; the rejection of the exploitation of small and medium-sized business, halting privatization of strategic enterprises and land, as well as the abolition of the "tariff and price genocide".

"Our ultimatum is a red line that the government shouldn't dare to cross. The Ukrainians will not tolerate any more. If the government crosses the red line, it should realize that its political history will end even worse than that of the regime of Yanukovych. And they will beg us to let them get away like Yanukovych," Tyahnybok warned.

On February 22, the activists of Svoboda, National Corps and the Right Sector held a march of national dignity in the downtown Kyiv.

Over 20 thousand protesters marched from Independence Square to the walls of the Verkhovna Rada. The united nationalists announced their demands in the session hall of the parliament.