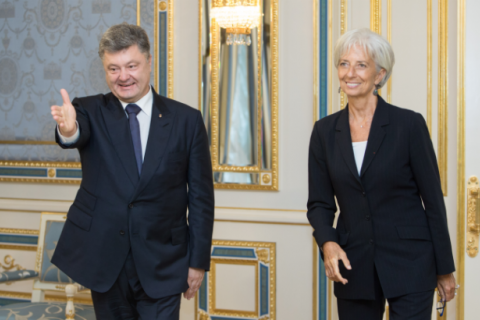 President Petro Poroshenko blamed the Self-Help party for the postponement of the fourth IMF tranche for Ukraine.

"Today, the IMF at its board meeting was to allocate to Ukraine the next one-billion dollar tranche that we utterly need to replenish our gold and foreign exchange reserves, to support the stability of the national currency, for a powerful signal to investors," Poroshenko said Monday at a meeting of the Regional Development Council.

The president noted that Ukraine had done a tremendous amount of work to obtain this money, including the development of a pension reform that does not involve a raise in the retirement age.

"However, the issue of Ukraine has been taken off the IMF agenda, so today finance minister, the head of the National Bank, the Prime Minister and myself will get together and discuss how the consequences of the absolutely irresponsible behavior of Ukrainian politicians can be rectified. I want to emphasize this once again: the delay was a consequence of the blockade," he said.

The civil blockade of Donbass, among whose organizers' was Self-Help has started in January. However, the IMF decided to postpone the allocation of fourth tranche only after the National Security and Defense Council halted the movement of goods across the contact line in Donbas in response to the seizure of Ukrainian enterprises in the breakaway "DPR and LPR republics".