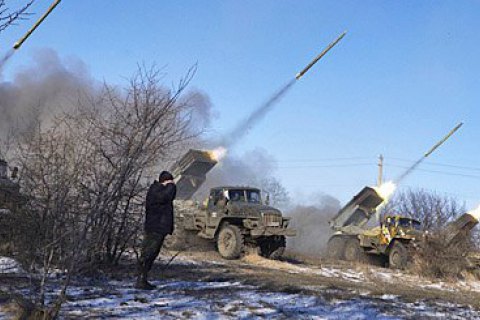 Later the ATO HQ said that the shelling followed an engagement between the Armed Forces of Ukraine and the enemy sabotage and reconnaissance group.

"Two enemy groups of up to 40 people came close to our positions near Vodyane at 09.30. During an engagement, having been properly rebuffed, the enemy groups retreated. A unit of the Ukrainian Armed Forces moved forward at the same time. After the enemy used heavy weapons – Grad BM-21 multiple-launch rocket systems, 152-mm and 122-mm artillery returned to its position," it said.

The ATO HQ later said that according to preliminary reports, "six Russian mercenaries were killed and nine wounded".

Later in the day the Military Television of Ukraine uploaded to its YouTube account a video of the Grad attack on Vodyane.

Five Ukrainian serviceman were wounded in Donbas on 19 March.