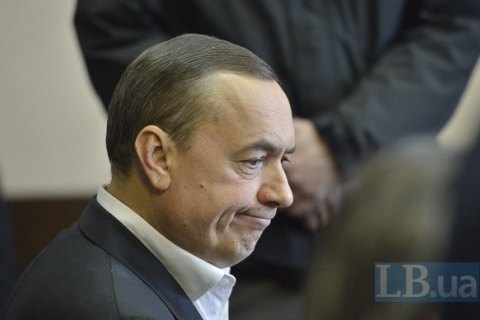 The specialized Anticorruption Prosecutor's office (SAP) on Wednesday appealed the decision of Kyiv's Solomyansky district court, in accordance with which ex-MP Mykola Martynenko was released from custody on parole.

The appeal was filed with the Court of Appeal of Kyiv, according to SAP's release.

The SAP demands the reversal of the decision of the court of first instance and the issuance of a new ruling demanding that the suspect remained in custody or released on 300 million hryvnya bail.

The SAP has appealed the short text of the judgment, since the full text will be available only on the last day, when an appeal can be filed.

The SAP head Nazar Kholodnytskyy stated that the measure of restraint chosen did not correspond neither the gravity of the crime committed nor the risks stated in the petition.

"The whole country watched the show that was offensive to the court and prosecution authorities, which was pulled by politicians and individuals in the courtroom, which is unacceptable and affected the judge's objectivity. This decision actually legalized the MPs pressure on the court," said Kholodnytskyy.

He reminded that in the event of Martynenko's escape the guarantors face only a fine of up to UAH 80,000, "which in addition would not be easy to recover, given the vast guarantees of the independence of the people's deputies."

Judge Oleksandr Bobrovnyk said that over 20 people, including MPs and ministers representing the People's Front, vouched for Martynenko.

All guarantors are representatives of the Popular Front. Martynenko is considered to be the sponsor of this party. He will remain on parole until 20 June.

The National Anticorruption Bureau of Ukraine (NABU) detained Martynenko and the head of the supervisory board of the Odesa Portal Plant, Serhiy Pereloma, on 20 April. The NABU suspects them of embezzling 17.2m dollars at the state-owned Eastern Ore Dressing Mill.

Similarly to Martynenko, Pereloma was released on parole after several People's Front MPs vouched for him.