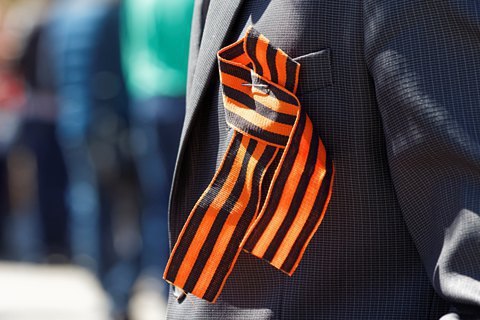 The Verkhovna Rada banned the St. George ribbon in Ukraine.

The bill supported, by 238 people's deputies, introduces an article entitled "The manufacture and propaganda of St. George's ribbon" into the Code of Administrative Offenses.

Public demonstration, earing or carrying of the ribbon is punishable by a fine ranging between 50-150 non-taxable minimums (850-2550 hryvnia). In case of repeated violation within one year is fraught with 150 to 300 non-taxable minimum (2550-5100 hryvnia) fine or administrative arrest for up to 15 days.

The explanatory note to the bill, sponsored by MP Anton Herashchenko (Popular Front), says that St. George's ribbon has become a "symbol of Russian occupation and aggression" in Ukraine.

Since 2014, it was used by Crimean "Self-Defense" formations and the pro-Russian separatists in Donbas.

"The public demonstration of the St. George's ribbon for propaganda purposes possesses public danger, is provocative in nature, and therefore must be attributed to offenses," reads the note..

Since 2015 Communist symbols are banned in Ukraine.