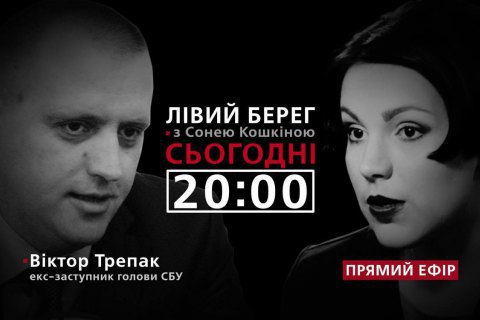 The name of Viktor Trepak, a career officer of the Security Service, first came to prominence in November 2015, when he resigned from the post of SBU deputy head in charge of the Main Directorate for Combating Corruption and Organized Crime. Trepak noted in a statement addressed to the president that he couldn't combat corruption with Viktor Shokin at the head of the Prosecutor-General's Office.

However, the true heyday in Trepak's career was his transfer of "black ledger" of the Party of Regions over to NABU over the head of SBU leadership. It was Trepak who has initiated opening of a criminal case against the chair of the Central Electoral Commission, Mykhailo Ohendovsky, currently under investigation. On the perspectives of this case, the work and reform of the Security Service, the murder of Pavel Sheremet and many other things Viktor Trepak will talk today with Sonya Koshkina on the program Left Bank on Channel 24.

By the way, the Left Bank will be aired at 20:00 Kyiv time until the end of this season.